The introduction of entirely new systems, as well as improvements to existing ones, will serve to bring a deeper level of immersion and enjoyment to your adventures. Expand your horizons even further by delving into new jobs and new player races! 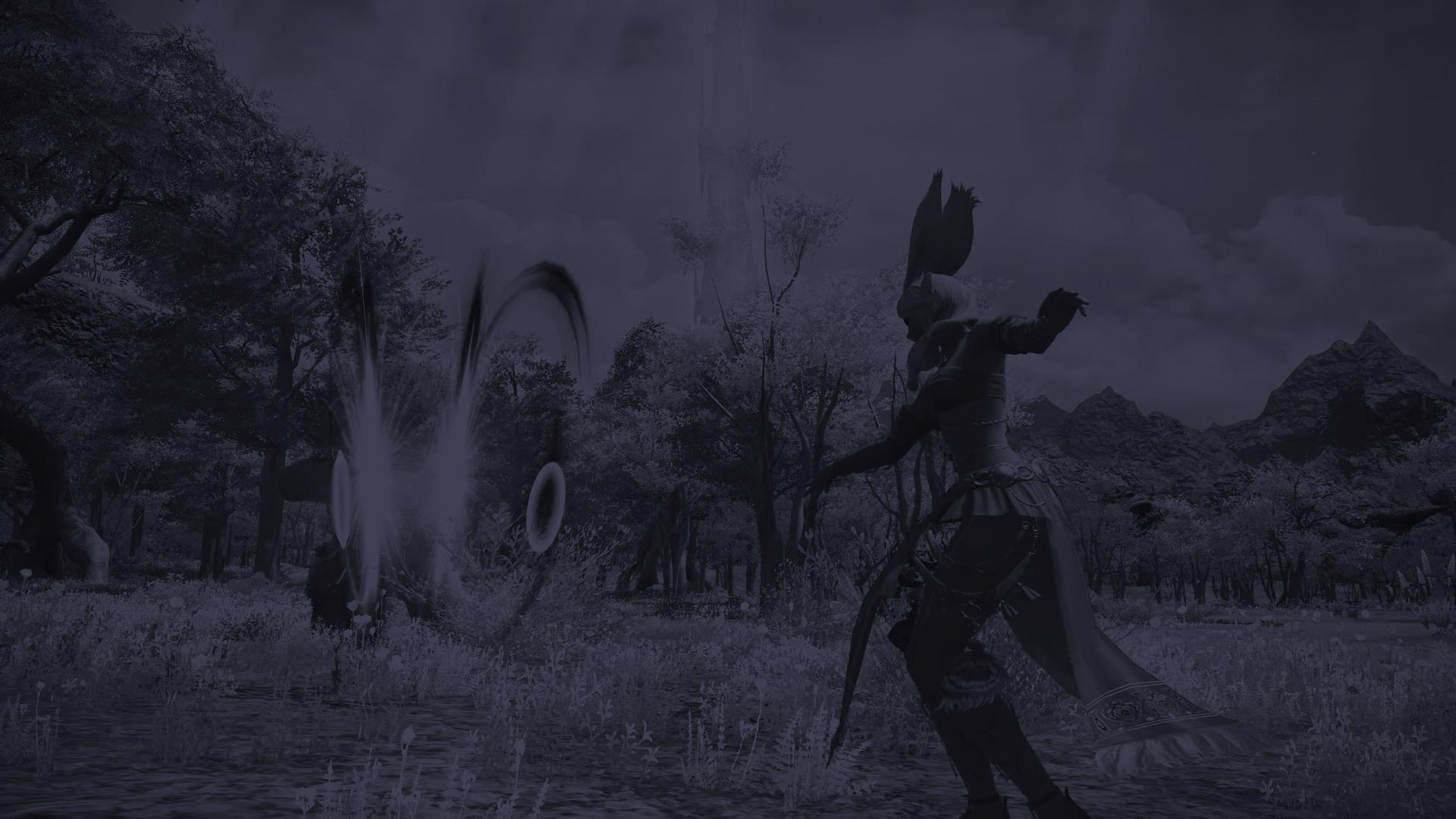 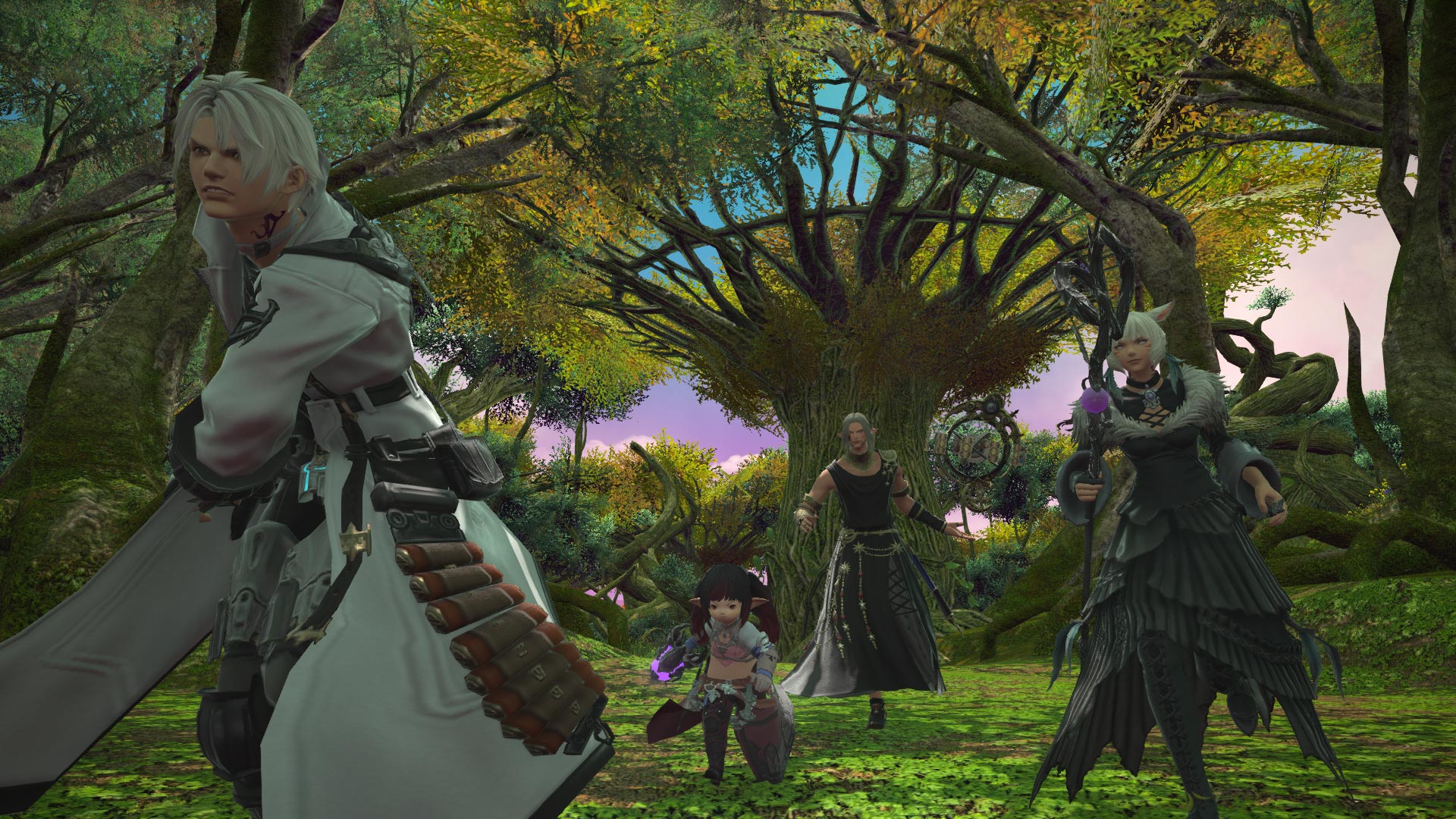 With the addition of new jobs and the level cap increase, the battle system will evolve as well. Not only will there be new elements to gameplay, but existing actions will be re-evaluated on their functionality, and adjustments will be made for a more intense battle experience.

In Shadowbringers, players will have the opportunity to challenge dungeons with a party of trusted non-player characters, including various Scions of the Seventh Dawn—though the traditional party matching systems will of course remain intact. 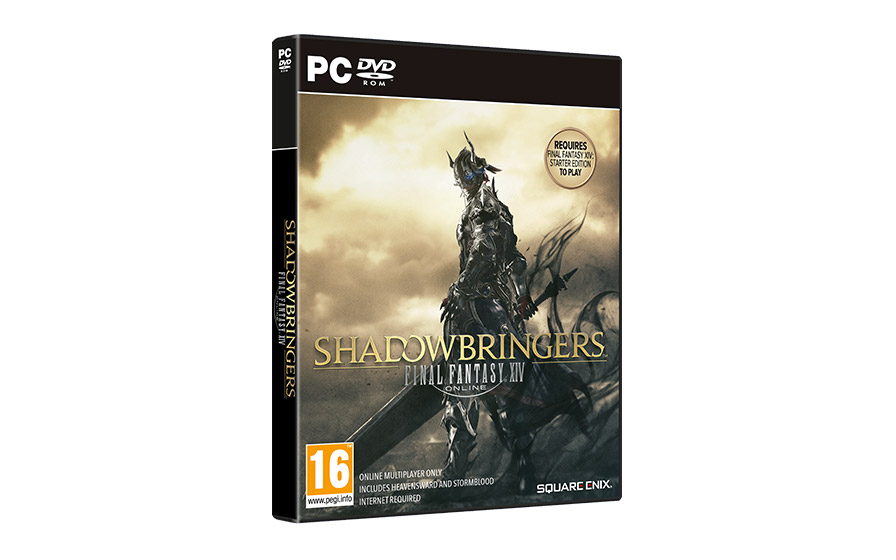 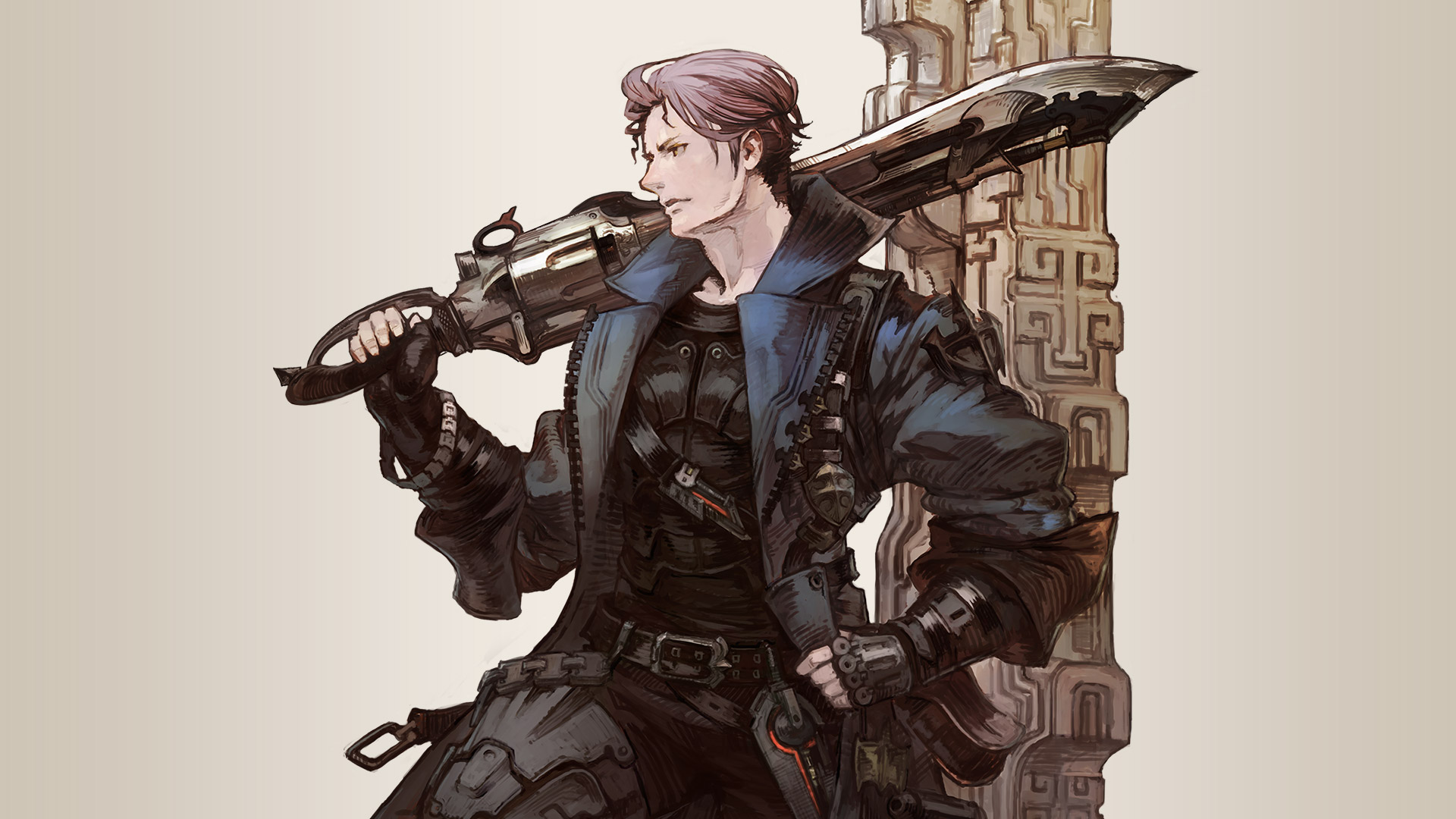 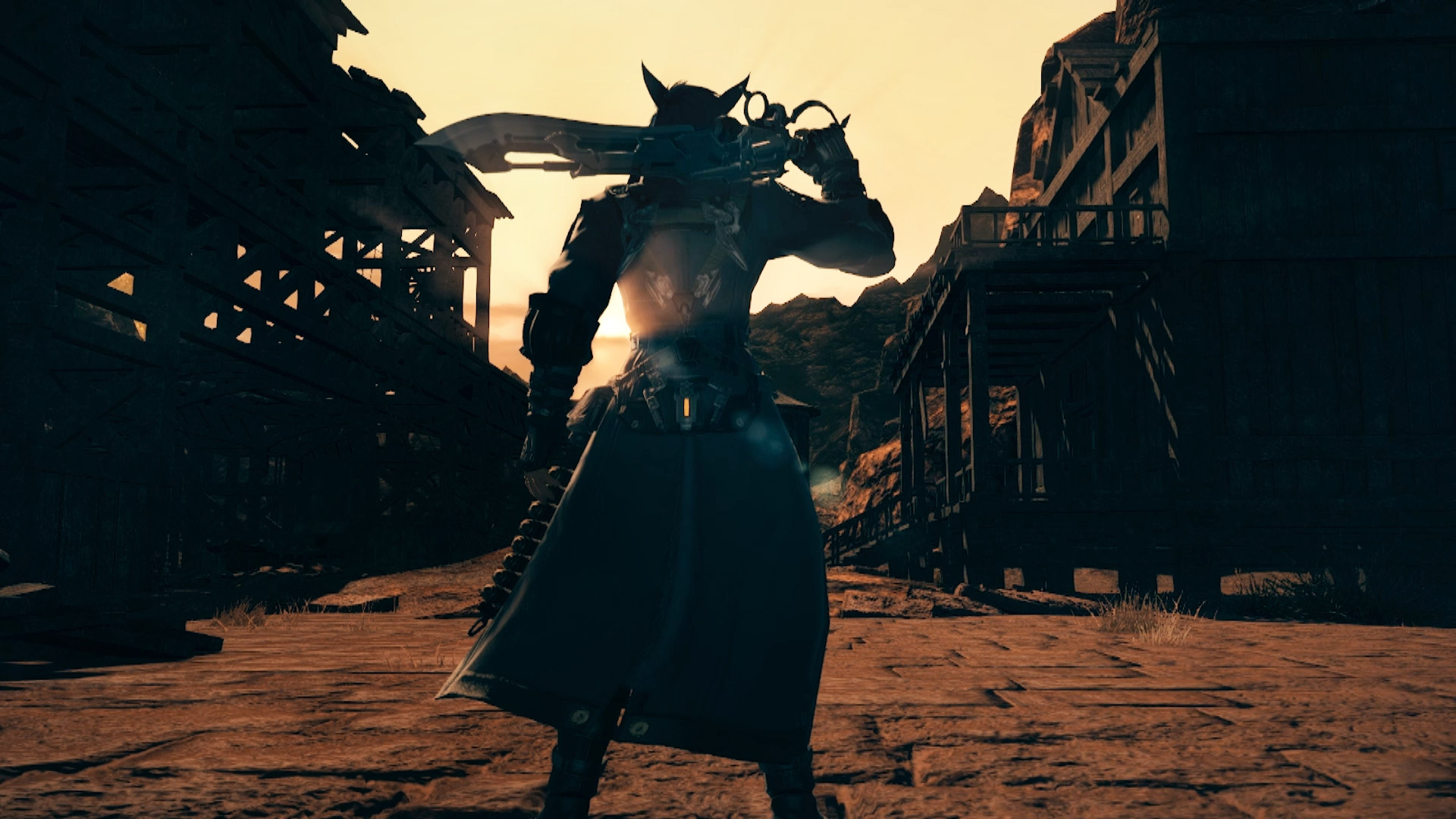 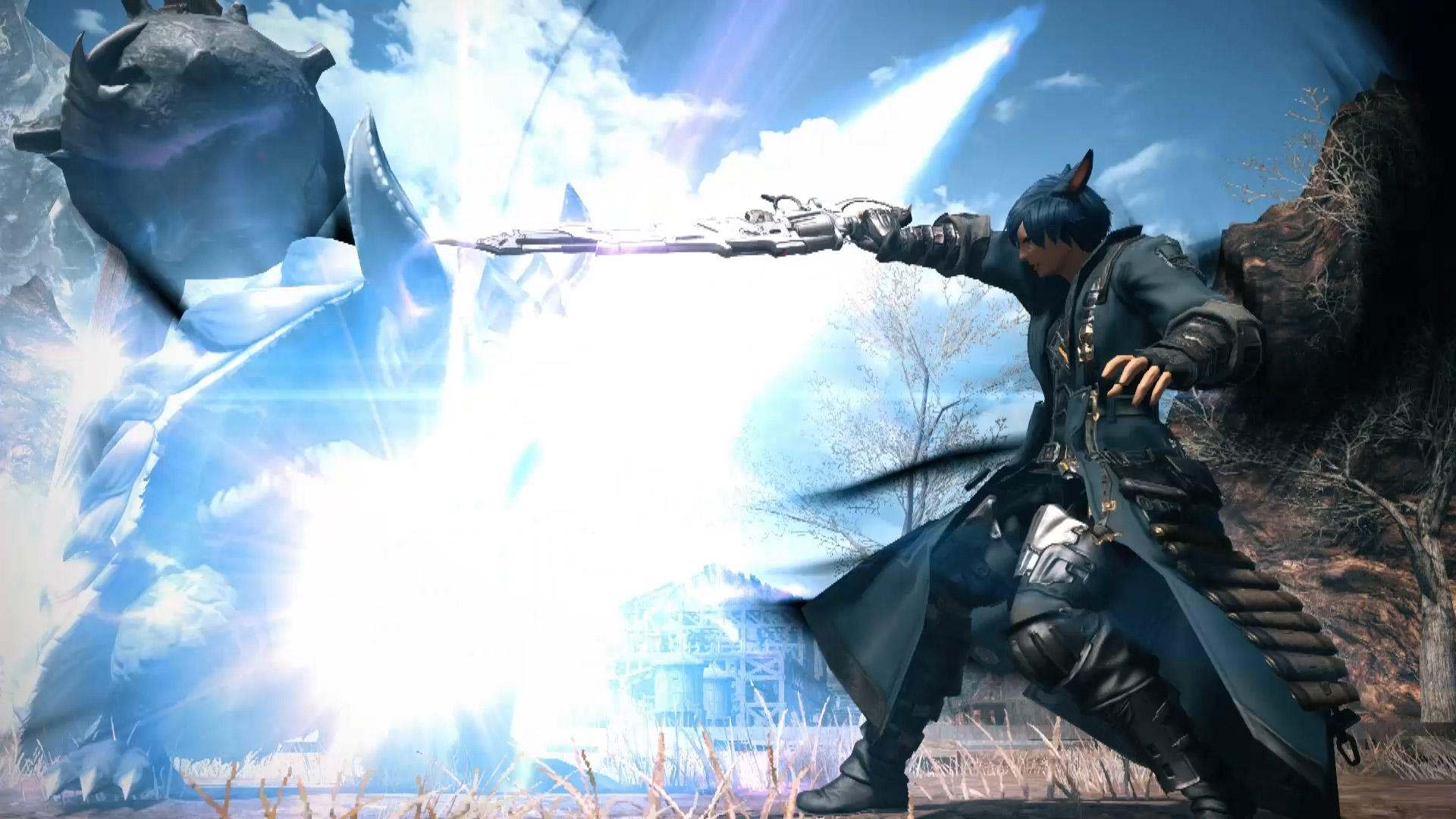 The Hrothgar of northern Ilsabard have passed the art of the gunblade from one generation to the next. The weapon itself combines a sword with a firing mechanism, emitting a range of magical effects by utilizing aetherially imbued cartridges. Originally employed by Queen Gunnhildr's personal guard, they were once known as "Gunnhildr's Blades" and differ greatly from the similarly named weapons used in the Garlean Empire. 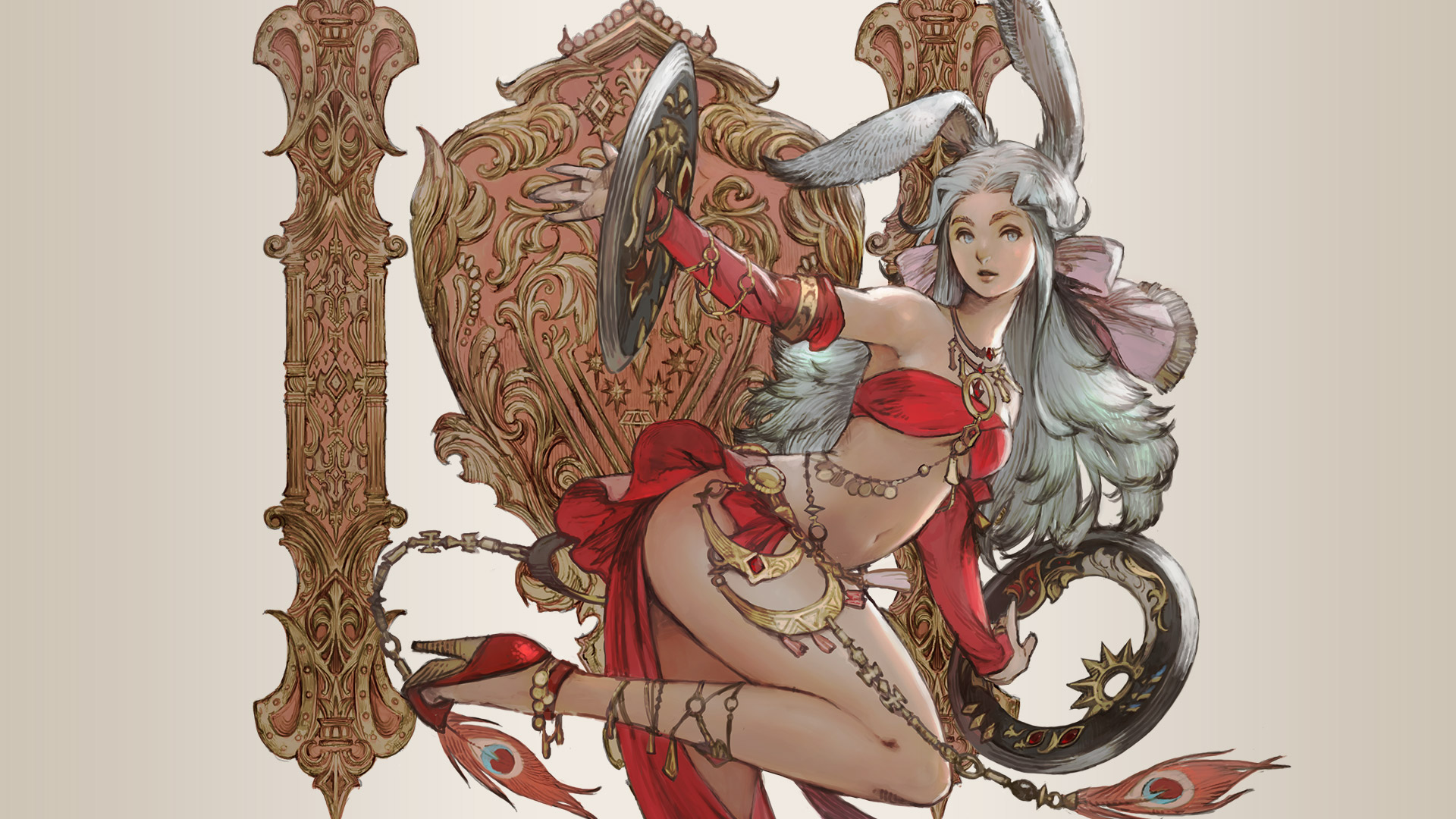 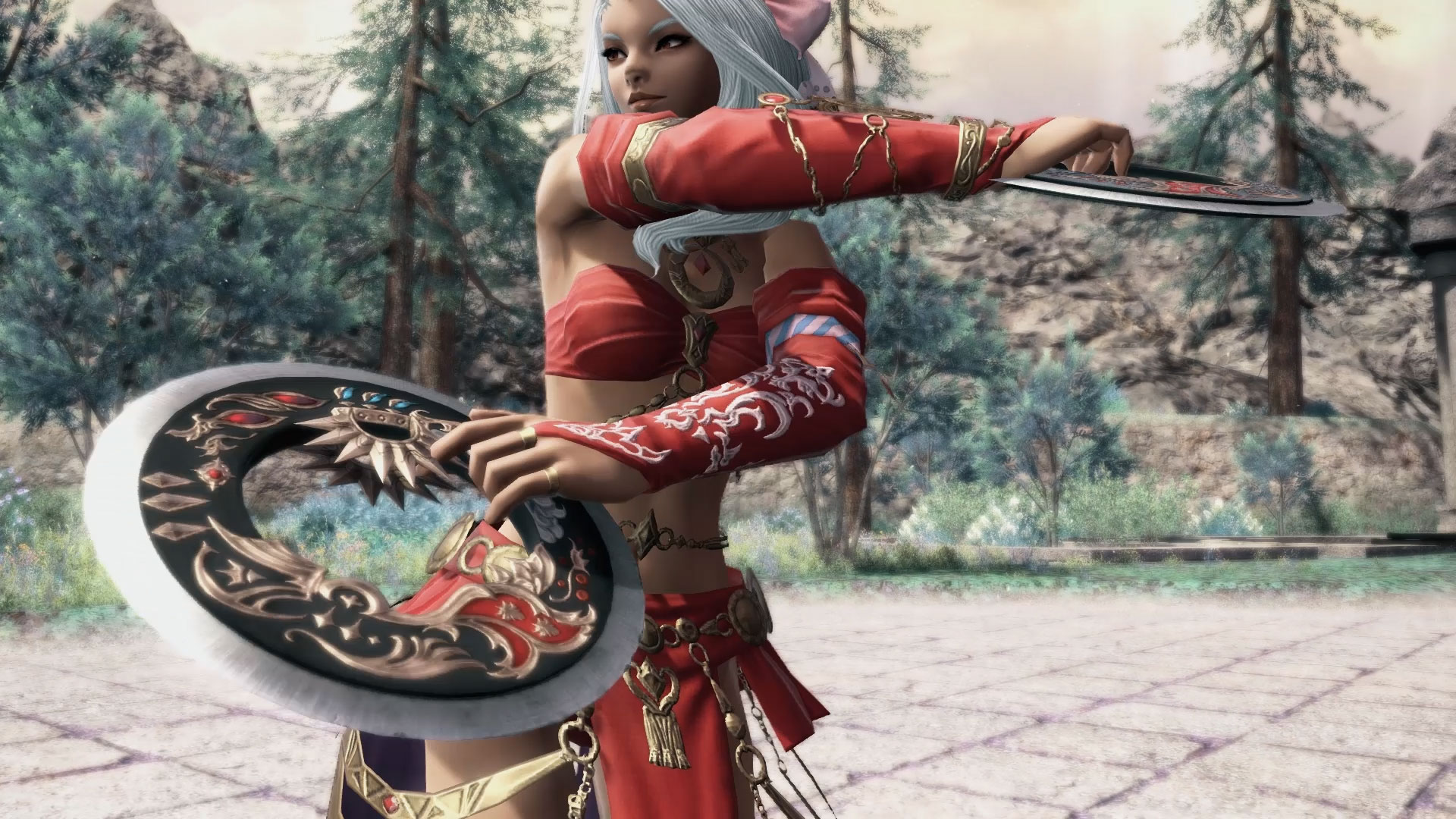 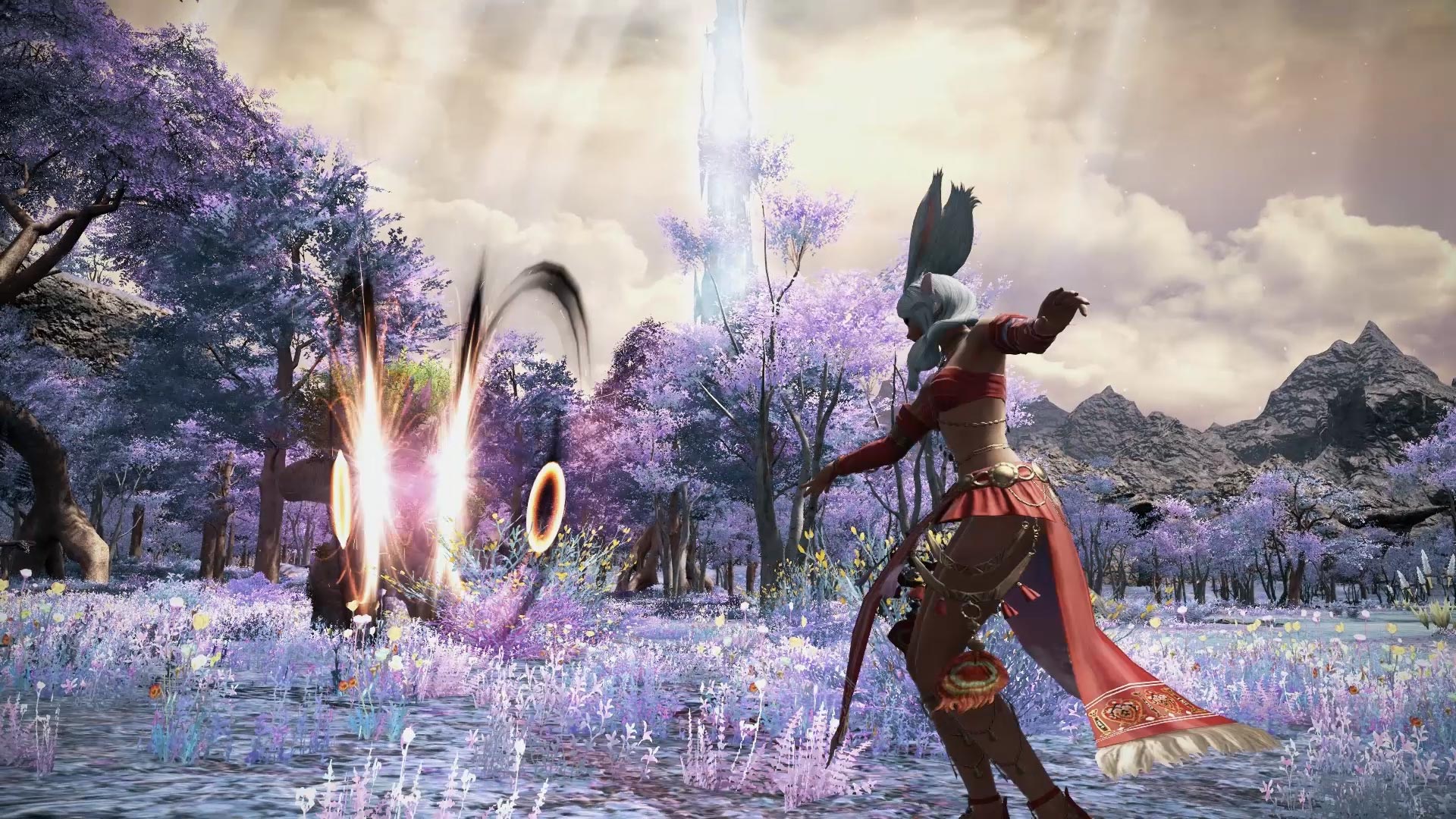 From the Near Eastern nation of Thavnair comes a troupe of bewitchingly graceful performers. Though certainly elegant and beautiful, their movements also speak of martial discipline─of a pulsing, persistent energy whose rhythm can inspire souls and soothe troubled hearts. Inured to the hardships of the road, these dancers have learned to land throwing weapons with the same exacting precision as their footfalls, removing any who would obstruct the endless beat of the dance. 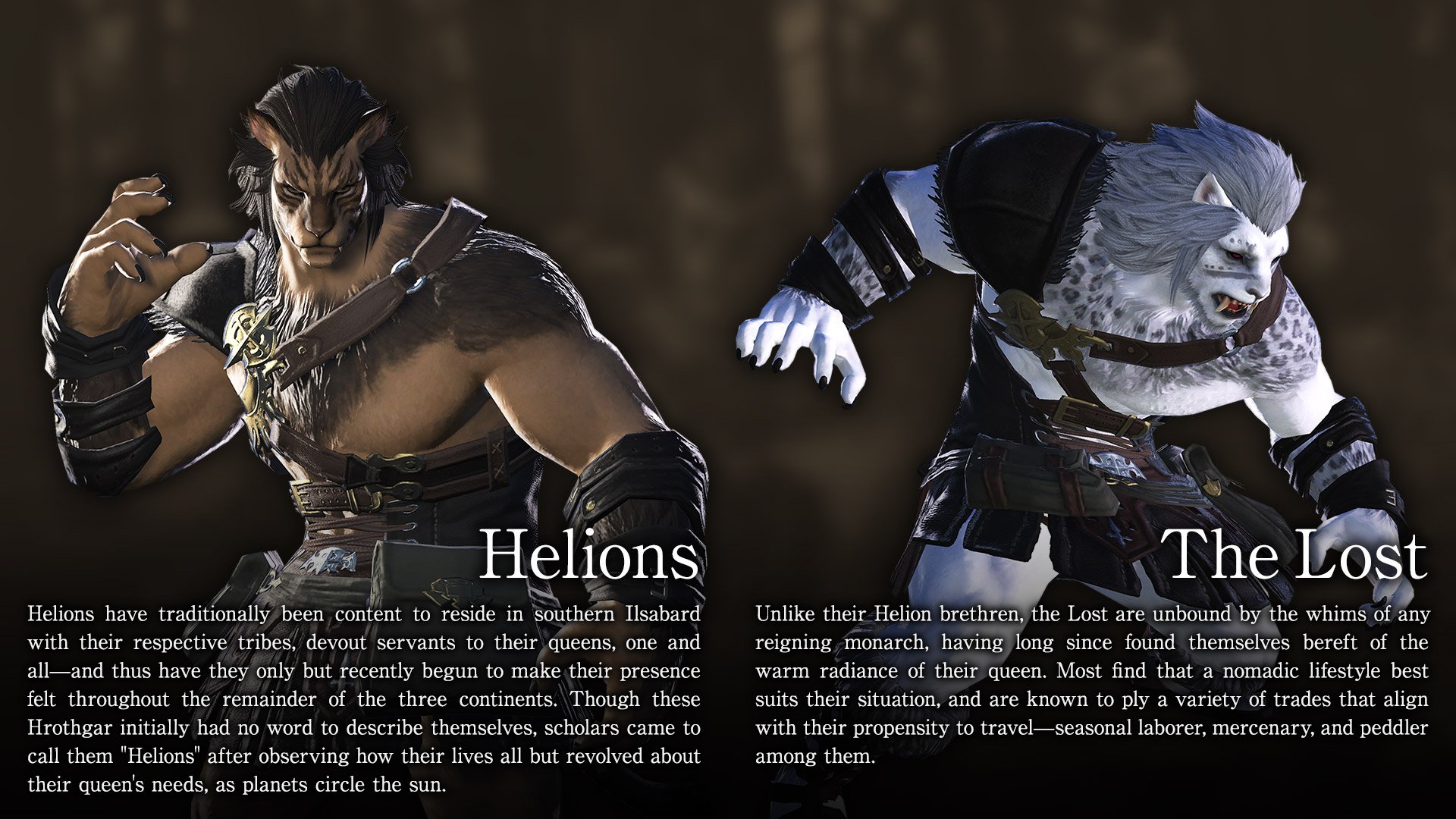 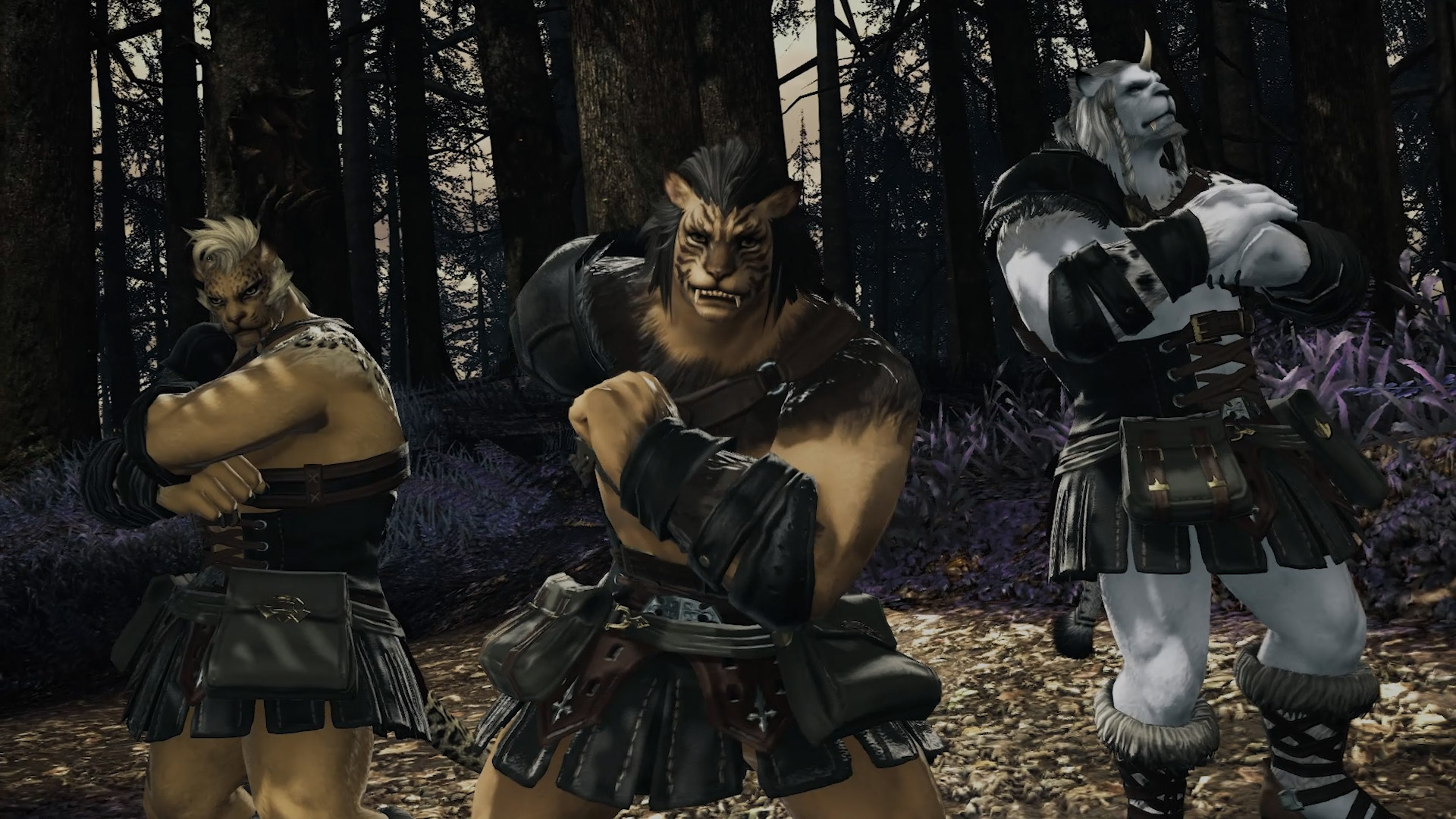 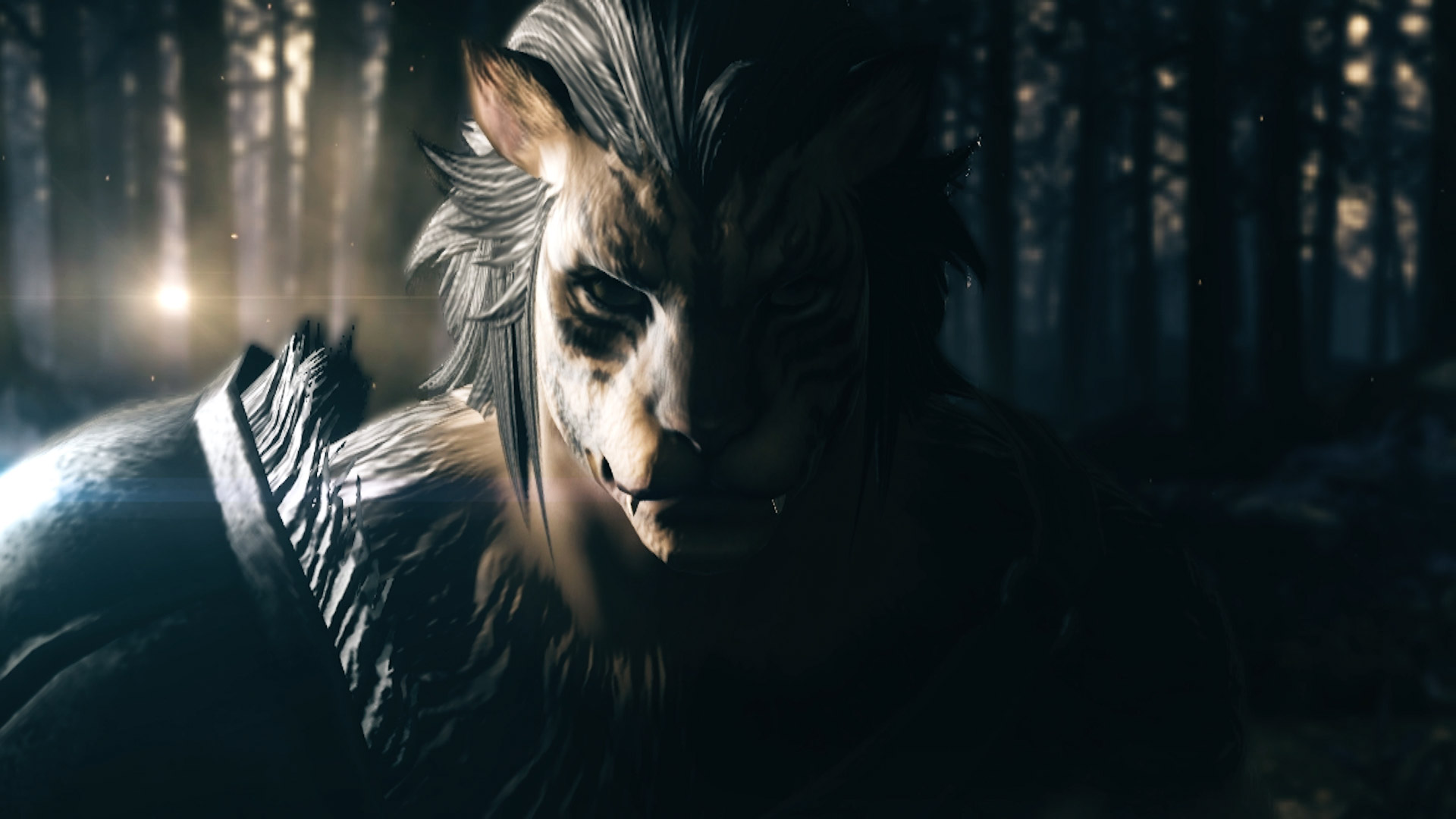 Hailing from the distant shores of Ilsabard, the Hrothgar are a burly people of lionlike appearance—or the males are, at least. Females number staggeringly few among their population, and thus are rarely so much as glimpsed by the other races.

The Hrothgar's imposing countenance─mitigated not at all by their sharp claws and still sharper fangs—incited panic amongst Eorzeans upon their arrival. As they were also unable to communicate, initial interactions with the commonfolk often escalated into conflict. It was not until the Hrothgar gained mastery of the common tongue that fears were allayed, and in time they would be as neighbors, welcome in all corners of the realm. 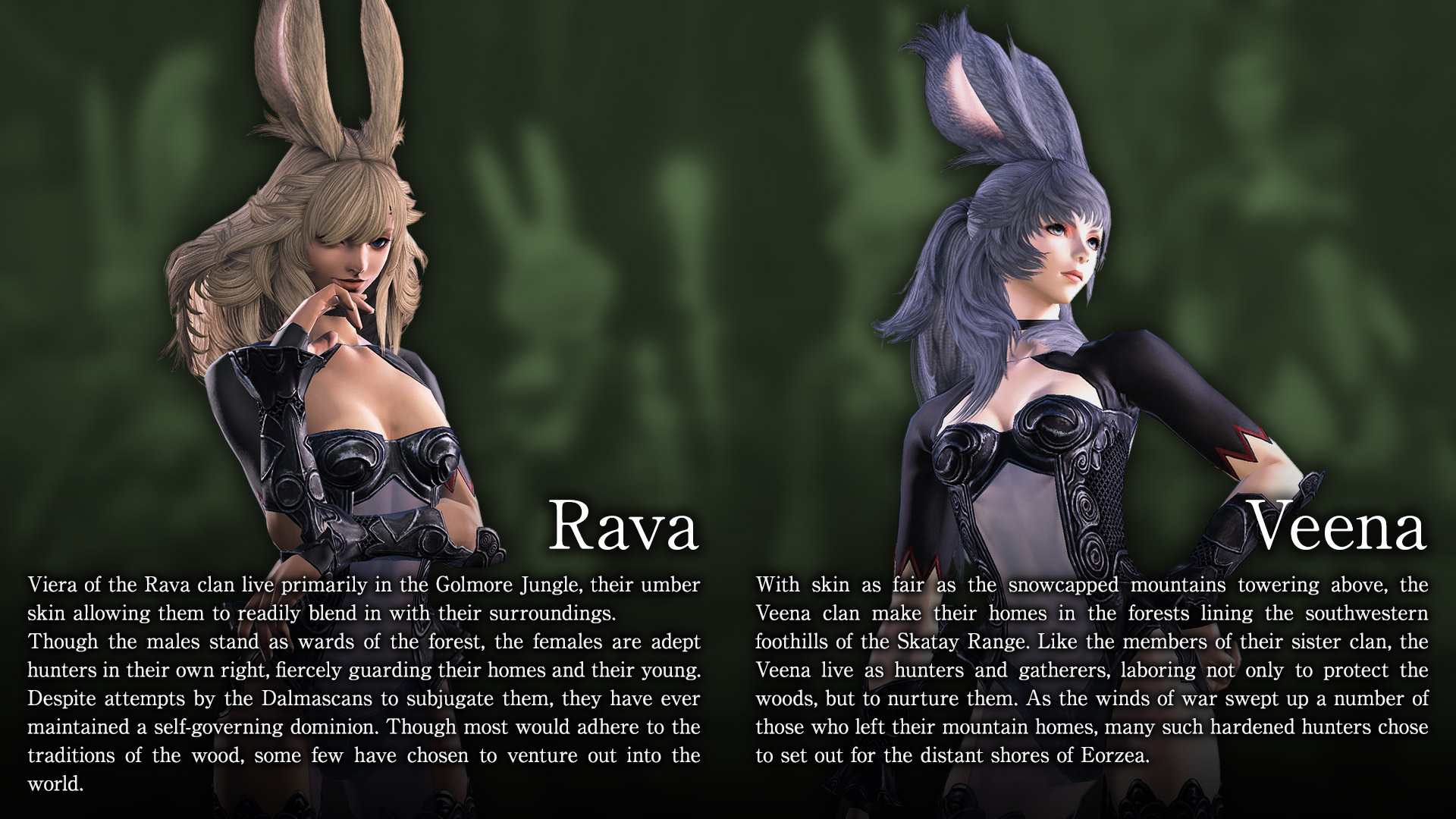 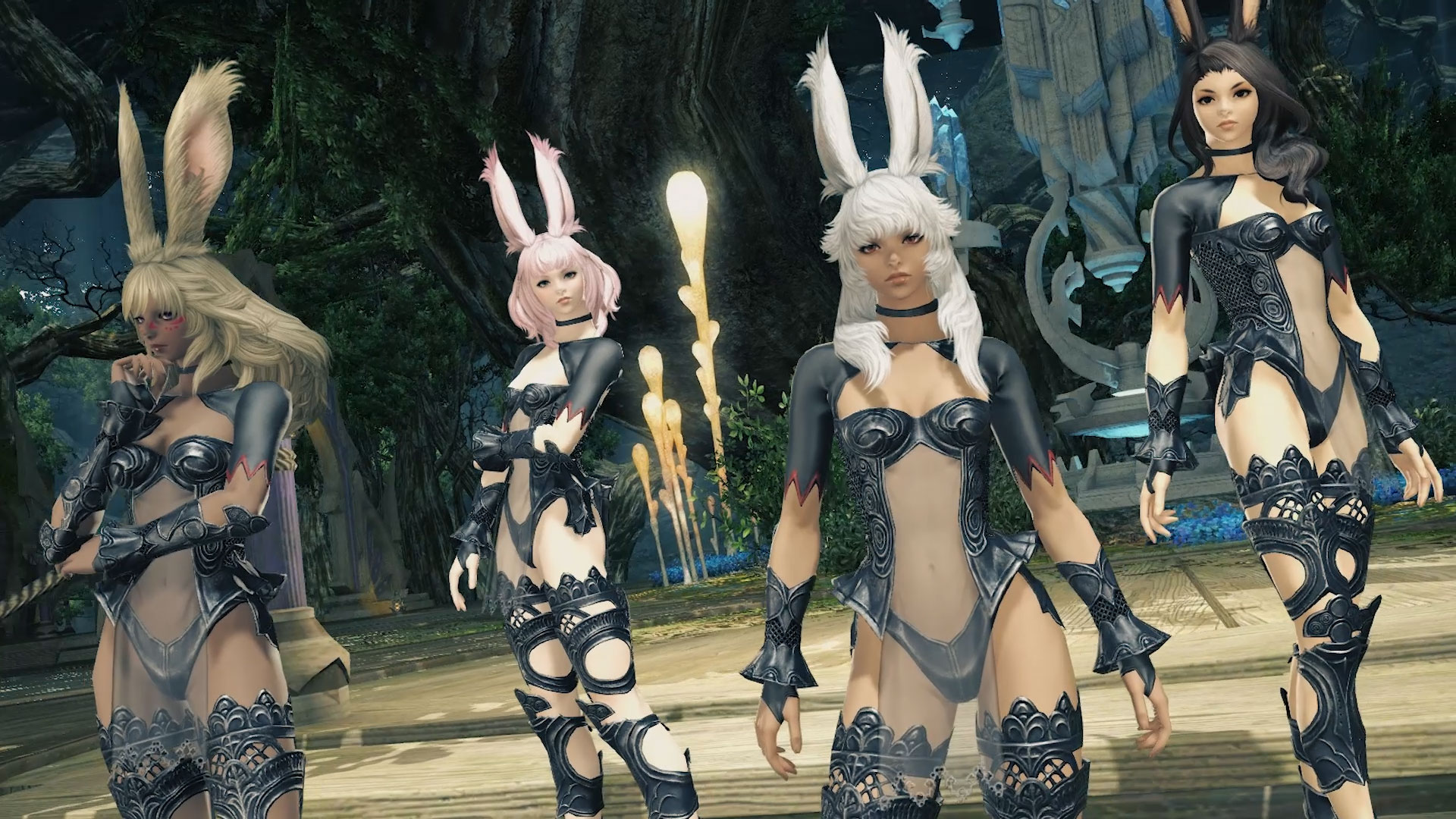 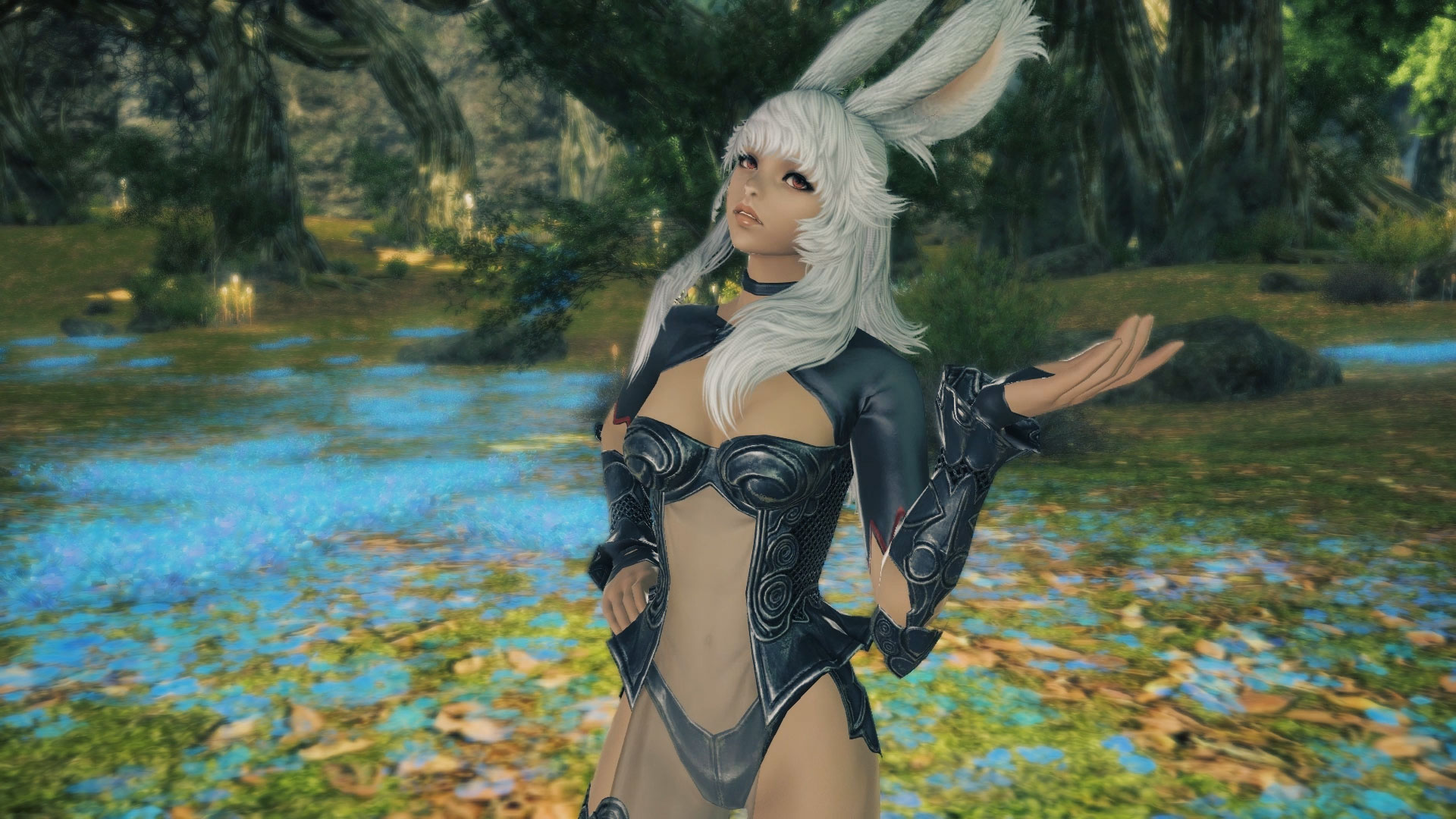 Of tall stature and slender frame, the Viera's physical appearance is strikingly similar to that of the Hyur and Elezen, save for their distinctive long ears. Adhering to a strict code known as the Green Word, they are prohibited from contact with the outside world under threat of exile. Their society is purely matriarchal, and males of age are seldom, if ever, found within the bounds of any village. They instead serve as protectors of the wood from the shadows, that no evil may ever encroach on their sacred lands.