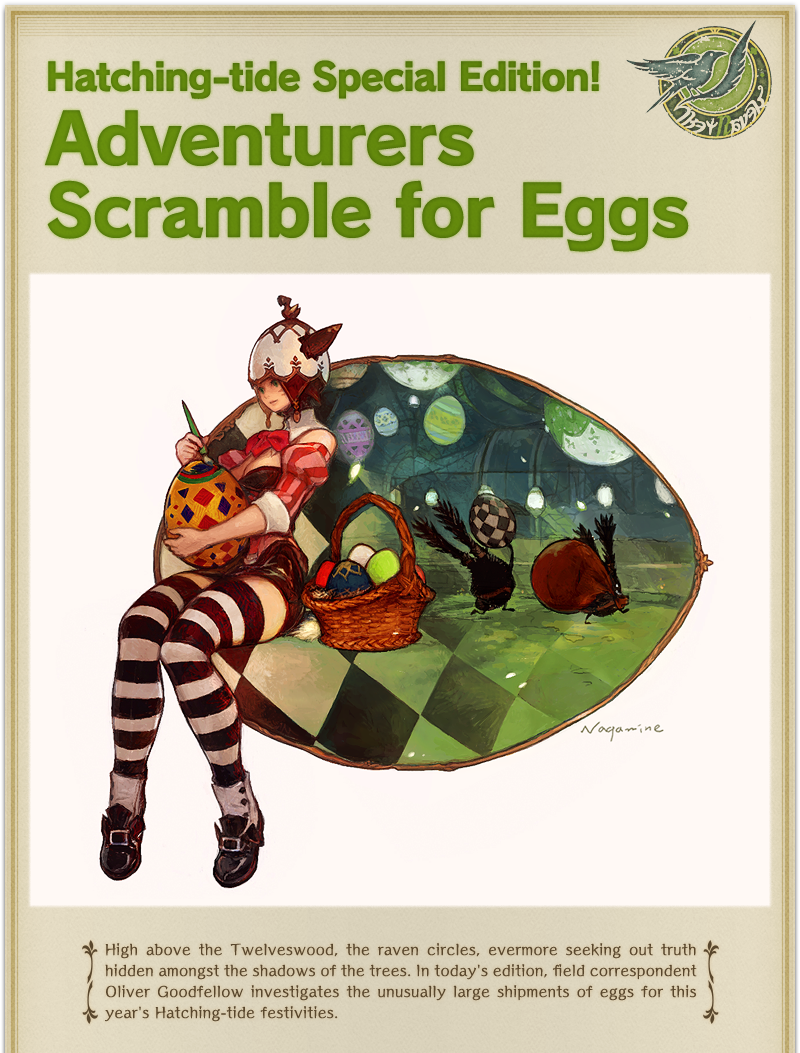 Sunny Side Up in Eorzea

In an age of shadow some fifteen centuries past, a colossal flood consumed the realm, ushering in the Sixth Umbral Era. When salvation was thought beyond reach, a band of heroes known as the Twelve Archons stepped forward to banish the darkness. Tales of their bravery have been passed down through the ages, and the tradition of Hatching-tide now serves to preserve the memory of their selfless actions.

The festival was founded several years ago, before the realm fell to ruin in the wake of the Seventh Calamity. An eccentric Miqo'te named Jihli Aliapoh is said to have been visited in her dreams by the Twelve Archons of eld, descending from the heavens atop beautifully bedecked eggs. They spoke unto her a declaration of their return, and she now works tirelessly to see her dream someday turn to reality. Each year countless eggs are gathered and painted in an array of colors with splendid patterns. Though most serve merely as decorations about town, a select few chosen by Jihli and her Dreamers are reserved for Hatching Hour, a grand ceremony in which the chosen eggs are used to summon the Archons back to Eorzea.

Hatching tide is a celebration of fellowship, exemplified by the Dreamers' concerted efforts to amass eggs for the festival. Nevertheless, I could not help but wonder if there is more to their preparations than the ornaments about town. The Dreamers have seen fit to ship eggs to the three city-states, but in sums far greater than last year's festival. The streets should be flooded with eggs, but there is neither hide nor hair of a surplus to be seen. It is my duty to seek the truth for our readers, and to that end, I scoured the taverns and alleyways of Eorzea for word of these wayward eggs. But therein lies the rub, for it would seem this year's celebration has a twist─something to entice newcomers to partake in the egg-centric revelry: a Hatching-tide egg hunt.

With the backing of Black Rabbit Traders, egg shells have been stuffed with a veritable bevy of goods, and hidden in the fields of Eorzea. Considering the dangers that await beyond the city gates, it would stand to reason that this hunt is intended for adventurers. With an insatiable desire for spoils and glory, I can think of no one better to pluck these eggs from their barbarous hiding places.

But to what end do they entice the realm's adventurers with promises of bounty? As Jihli and her Dreamers eagerly await the time of Hatching Hour, perhaps the eggs they covet so dearly will contain the answers we seek.