Patch 5.15 contains content that can only be accessed by registering the expansion packs for FINAL FANTASY XIV to your service account. To distinguish between adjustments that are and are not affected by the registration of these expansions, the following notations will be used throughout the patch notes:

These additions and adjustments require the purchase and registration of FINAL FANTASY XIV: Shadowbringers.

New job quests have been added. 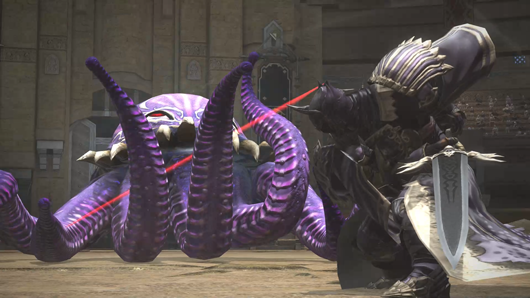 Into the Blue Again

* The timer for auto-demolition on the Japanese data center will resume with the release of patch 5.15. Further details can be found on the Lodestone.

New furnishings have been added. 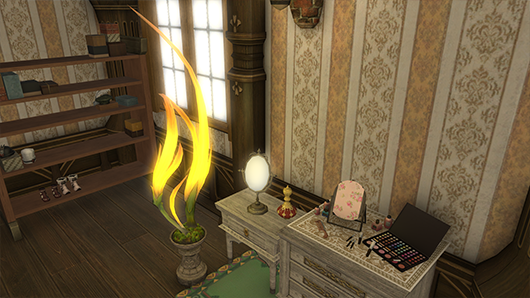 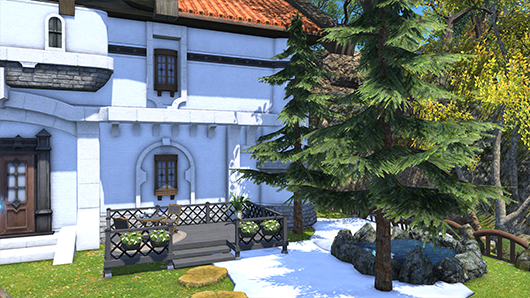 A new emote has been added. 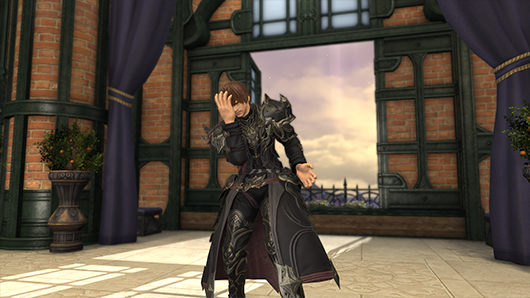 The level cap for blue mage has been increased to 60. 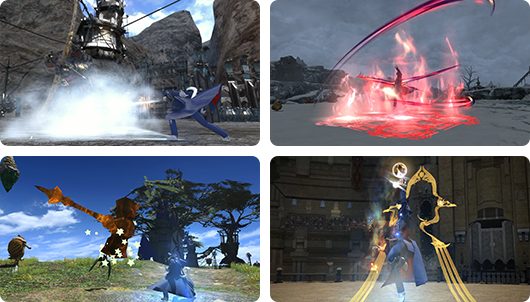 The effects of certain blue magic spells have been adjusted.

New stages have been added to the Masked Carnivale.

These stages will become available as you complete certain blue mage job quests.
* Information relating to the masked carnival stages has been corrected.
Updated Thursday, 12 December at 9:30 (GMT) 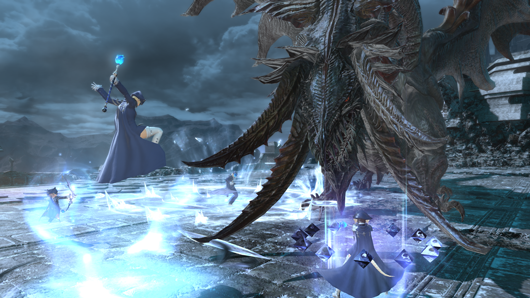 The blue mage log allows you to form parties with other blue mages and participate in specific duties.

Prove your prowess in the blue magic arts by completing various trials and dungeons to reap rich rewards.

The Blue Mage Log tab will be added to the Blue Magic Spellbook interface upon completing the requisite quest. 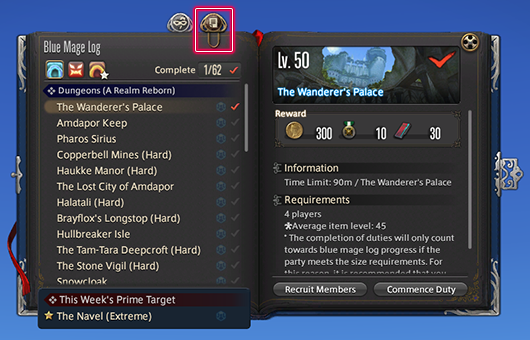 With the requisite number of party members playing as blue mage, register for a duty with Undersized Party disabled. Upon entering the instance, a message will display confirming you meet the requirements of the blue mage log.

Opening the Blue Mage Log tab of the spellbook will display a list of available duties separated into three categories: dungeons, trials, and raids.

Upon clearing these duties while meeting all duty requirements, they will be marked as complete.

Completion of blue mage log entries will reward players with Allied Seals and gil, with greater rewards granted when completing duties for the first time. 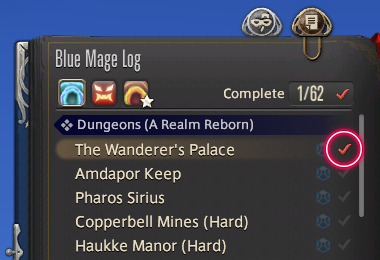 Every week, certain blue mage log entries will be marked with a silver or gold star, designating them as weekly targets.
* The additional rewards for a weekly target can only be earned once per week.
* Weekly targets will reset every Tuesday at 8:00 (GMT). 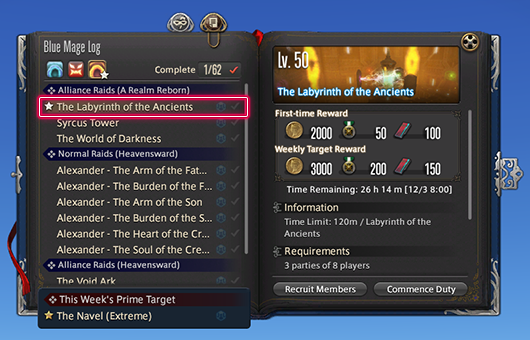 While the prime target offers increased rewards, the difficulty is significantly higher. The duties selected as prime targets are not otherwise accessible via the blue mage log. 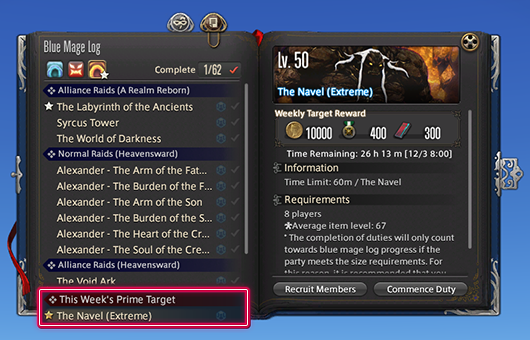 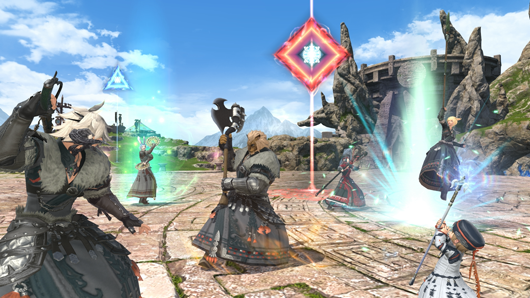 Frontline is a PvP challenge which engages three teams of adventurers, each team representing one of the three Grand Companies. Teams consist of up to 24 players in an alliance, allowing for a grand total of 72 players in a single battle.

Success on the frontline will depend heavily not only on individual skill, but on your ability to work as a team.

The rules of engagement and victory requirements are generally the same as those in Seal Rock (Seize).

Across the field of battle, there are sacred sites known as ovoos. By laying claim to these locations, players can increase their team's tactical rating over time.

In the course of battle, an ovoo will assume one of four states, in the following order: 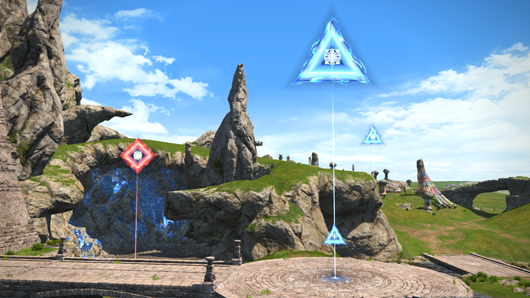 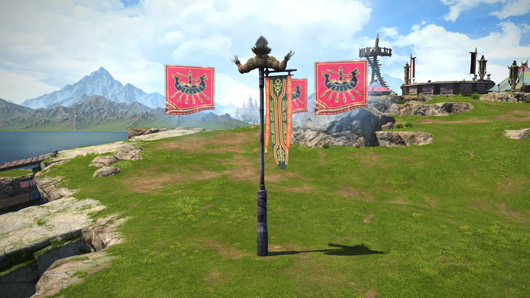 When an ovoo begins activating, it will randomly be assigned a rank: B, A, or S. While higher-ranked ovoos are rarer, they increase a team's tactical rating at a faster rate. The closer it is to the center of the battlefield, the greater the likelihood that an ovoo's rank will be high. 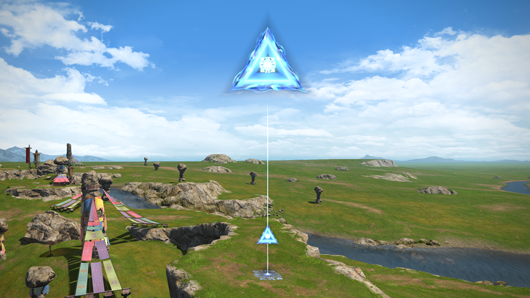 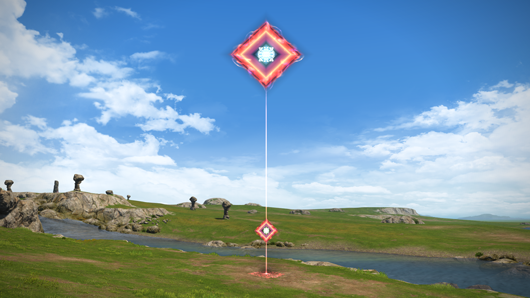 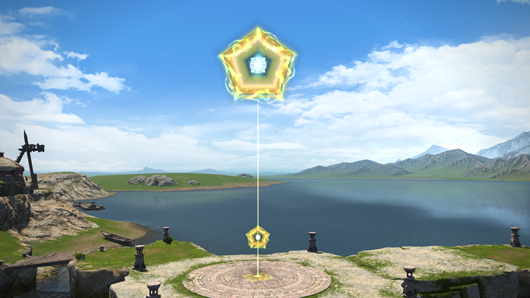 As the battle progresses, the number of ovoos that can be simultaneously active will decrease. At the same time, the likelihood that they will activate at a higher rank will increase.

By defeating players from opposing teams, players can increase their tactical rating while at the same time decreasing that of the opposing teams.

The duties available in Daily Challenge: Frontline have been changed.

New recipes have been added.

The appearance of certain equipment obtained from the alliance raid the Copied Factory has been adjusted.

The following crafter actions can now be used even when their effects are already active.

The number of remaining steps will be overwritten upon use.

New mounts have been added. 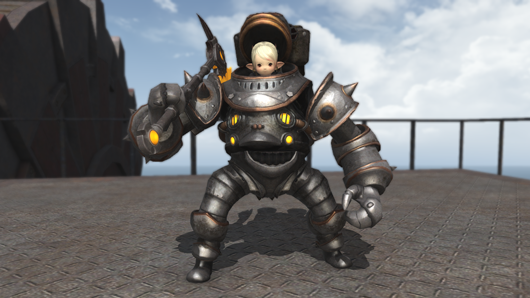 A new minion has been added. 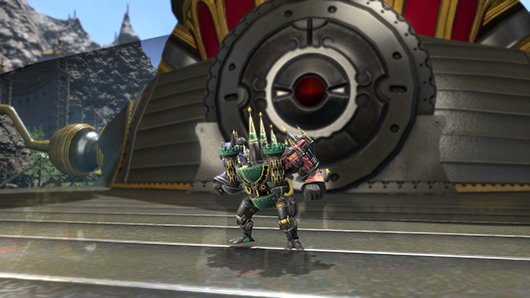 These new achievements can be confirmed in the Achievements window under the Battle category. They can be earned by completing their associated duties while meeting the following requirements:

Band together with your fellow adventurers to prove your mettle and mastery of blue magic.

The renewal period for mentor certification has ended.

Players who have not renewed their certification will no longer be mentors. However, they may be recertified provided they meet the new certification requirements.

The display of the version number at the bottom of the launcher has been adjusted.

KEDAMA (Carbuncle) has been formed.

The Red Dandelion (Shinryu) has been formed.

persephones (Hades) has been formed.