Patch 4.31 contains content that can only be accessed by registering the expansion packs for FINAL FANTASY XIV to your service account. To distinguish between adjustments that are and are not affected by the registration of these expansions, the following notations will be used throughout the patch notes:

The high-end duty The Weapon's Refrain (Ultimate) has been added.

Just as warriors temper their spirits in battle, so too does the wandering minstrel hone his craft through colorful retellings of heroic deeds. His rendition of your triumph over the Ultima Weapon takes the threads of history and weaves them into an epic tapestry. However, his ballad contains so many embellishments and fabrications that it bears little resemblance to your own tale, and you wonder if he was even listening to you. Nevertheless, you find yourself utterly captivated─whisked away to a battlefield that exists only in your mind's eye... 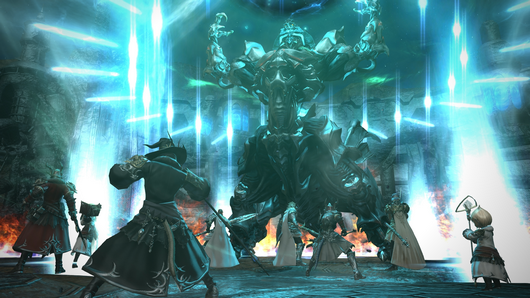 The Weapon's Refrain (Ultimate) can only be accessed via the Raid Finder after forming a party of eight players who have all completed Sigmascape V4.0 (Savage).

Upon completing The Weapon's Refrain (Ultimate), players can also earn a separate reward once per week. Players who have yet to receive that week's reward can still claim it even if other members of the party have completed the duty prior to the weekly reset.

The reward can be exchanged with Eschina in Rhalgr's Reach (X:13.8 Y:11.8) for Ultima weapons.

New music has been added.

Fantastic Finale (Maduin) has been formed.

JACK JEANNE (Asura) has been formed.

Fantasia Anonymous (Seraph) has been formed.

The Haunted House (Maduin) has been formed.

Blackfyre Rebellion (Halicarnassus) has been formed.