At the far end of the audience hall in the Holy Vault of Ishgard, set upon a dais spanning its breadth, was the archbishop's throne. From this sacred seat, the church's most powerful men had ruled for centuries, but no longer.

The throne lay empty─a relic of the time before the war's end and the republic's birth. Where once power was hoarded, it was now shared. Where once the privileged conspired in secret, the people's chosen now debated in earnest. Count Artoirel de Fortemps was one such representative, and on this day, like many others before it, he sat in attendance as a member of the House of Lords.

"If there are no further comments, I move that we end the session with a vote," Aymeric declared, his voice echoing across the grey flagstones of the chamber. "Once yours is cast, you are free to take your leave. My apologies for keeping you all until such a late hour, my lords. I know full well you have great demands upon your time."

Says the man with the greatest demands upon his, Artoirel thought wryly. Between scrambling hither and yon on official business and presiding over house sessions, he knew that his friend had precious little time for himself.

At the lord speaker's words, the members rose to their feet and began making their way to the ballot box in the predetermined order. Many were still fumbling their way through the unfamiliar business of republican governance, Artoirel himself not least of all, but he pressed on with dutiful determination. Having cast his vote, he returned to his seat to gather up his belongings when the empty throne chanced to catch his eye. As he beheld it, his vision blurred as the memory of a day seventeen years ago came flooding back. A day from what now felt like another life... 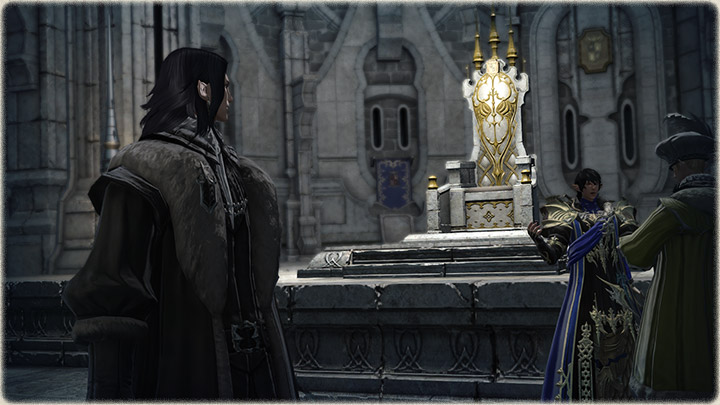 The shirt's collar felt stiff as canvas, but Artoirel endured the discomfort. The occasion called for the finest finery, and the outfit his manservant had assisted him into made his dinner garb appear uncouth in comparison. It was not every day, after all, that Ishgard saw a changing of its ordained ruler. Wishing to be part of the historic occasion of Archbishop Thordan VII's coronation, highborn and lowborn alike had gathered before the Vault, the mass of citizenry extending as far as the Hoplon. However, none save a privileged few outside of high-ranking clergy and the archbishop's personal guard were permitted to attend the official proceedings.

In his capacity as the scion of House Fortemps, Artoirel stood beside his father in the audience hall, endeavoring to look as dignified as his thirteen summers would allow. His youngest brother Emmanellain was there too, and, to his credit, was behaving himself despite being too little to appreciate the gravity of the event.

Haurchefant, however, was absent─on account of not bearing the name Fortemps, their lord father had earlier explained. Yet even before this, Artoirel had always sensed that there was something different about his brother, if only through his aloofness and the disdain with which their mother treated him.

Thus the ceremony proceeded with his family short a member, but if anyone else was bothered by it, they did not let it show. And after a series of solemn rites, Thordan VII finally appeared in the sacred vestment of the archbishop. Holding the Fury's Grace, the holy crozier of his office, he strode purposefully and majestically towards the throne as Artoirel looked on in awe.

"I, Thordan, seventh of my name, do swear to serve as an instrument of Halone's will. Embodying the spirit of King Thordan, our nation's revered founder, I shall preach the faith and protect the faithful, that together we might defeat the dragon menace and bring the Fury's blessing unto all men."

The archbishop's words stirred Artoirel to the core, reaffirming the lessons he had been taught since first he could remember. He was descended from the legendary knights twelve. His chest fairly bursting with pride, he made his own pledge.

Like my ancestors before me, I will become a knight brave and true. And I will serve Ishgard unto my dying breath.

At length, the ceremony came to a close, and the doors to the audience hall were thrown open to let in a flood of lesser peerage. Some wished to catch a glimpse of their newly anointed leader, while others sought to curry favor with the High Houses. Together with Emmanellain, Artoirel followed his father as he led them through the dance of nobility, keeping his eyes peeled in careful observance as he was taught. One day, he too would need to navigate these selfsame waters.

He noticed the members of Houses Durendaire and Dzemael take their leave early. Sharing fields of red on their crests, the two families tended to keep to their own, giving the impression that they were ever plotting some manner of intrigue. In contrast, Houses Fortemps and Haillenarte, which shared black fields and ancient ties, were hardly reclusive, and were in fact regular fixtures in social events. Even now, his father Lord Edmont had begun engaging in cordial conversation with Lord Baurendouin, his counterpart in the latter. Of the children of that house, all were present save Francel, who was yet too tender in years to attend formal functions. When the adults finally dispensed with the pleasantries and began discussing difficult matters, the sons and daughters took the opportunity to withdraw and speak among themselves.

Beaming his brightest smile, Emmanellain sidled over to where Chlodebaimt and Laniaitte, the third- and fourth-born of House Haillenarte, were standing. Artoirel was not surprised to see a gaggle of younger children attending Chlodebaimt—he had a way with the little ones. Meanwhile, Artoirel turned to face Stephanivien and Aurvael, the first and second sons. Such noble children would one day become allies and rivals both, he knew, and it would behoove him to maintain friendly relations. But not too friendly.

"My lords," he said, sweeping them a well-rehearsed bow.

Stephanivien chuckled. "Oh, come now, let's not stand on ceremony. We are of an age, are we not?"

In a languid tone, Aurvael added, "Aye, and I've had my fill of the dry formalities. It's tiresome stuff, and I want to go home."

"Likewise, Brother. I am on the cusp of completing my latest invention. Shall we beg leave of Father?"

And as quick as that, the brothers bade Artoirel farewell, asked their father to be excused, and happily trotted off. As he watched them leave, Artoirel could not help but envy the carefree pair.

Finding himself bereft of company once more, he returned to observing the people around him. Ere long, he spied a dark-haired youth, slightly older perhaps than himself, regarding the archbishop's throne with what could only be described as a glare. Puzzled, he approached and asked.

"Why do you frown so? Is this not a joyous occasion?"

The youth started at the question and turned to face Artoirel. His eyes widened in surprise, but soon narrowed as anger reclaimed his features.

"Clearly you have not heard the rumors of my birth. Not that it is any concern of yours."

Artoirel winced. In turn, the youth's expression softened in remorse.

"My apologies, that was ill done." Clearing his throat, he continued pleasantly. "My name is Aymeric. How was the ceremony, if I may ask? I did not have the pleasure of witnessing it."

The excitement of the event still fresh in his mind, Artoirel forgot his discomfort and held forth with unbridled admiration. "Oh, 'twas truly inspiring. I shan't soon forget His Eminence's oath. He swore that he would serve as an instrument of Halone's will and bless all men."

"Bless all men... Do you suppose he can do such a thing?"

Artoirel was about to reply when another stole the words right from his mouth.

"Absolutely! The archbishop is a great man!"

The two turned to find a golden-haired boy, garbed in common fashion, regarding them eagerly─the son of a knight, perhaps. Seeming to remember himself, the newcomer bowed deeply as one does to one's betters, before resuming his enthusiastic account.

"His Eminence graced our school with a visit last year. He prayed for us, that we would become strong, righteous knights. 'Tis my dream to serve him one day."

The boy's passion struck a chord with Artoirel, who nodded in approval. Aymeric, however, simply stared. He parted his lips as if to speak, but thinking better of it, said nothing.

Nary a moment later, a knight emerged from the throng and barked.

"Ah, there's Valhourdin's lad!" Placing a firm hand on their golden-haired counterpart's shoulder, he continued. "Come, your father's been looking for you."

Drawing himself up to his full height, the boy swept them another bow and departed with the knight.

"I too must be on my way," said Aymeric. "By your leave, Lord Artoirel."

By the time he had gathered his wits enough to wonder when he had given his name, his companion had already disappeared. Like himself, Aymeric too must have been taught to be observant, he concluded. To listen and learn in preparation for the day you must join in the dance...

"Lord Artoirel, are you well?"

A familiar voice plucked him from his reverie. He turned to see Aymeric standing a few steps away. Glancing about the chamber, he realized that it was empty save for him and his friend. How far you have come since that day...

After that meeting, Artoirel had discovered that Aymeric de Borel, the adopted son of a viscount, was rumored to be the illegitimate issue of Archbishop Thordan himself. Out of kindness, his parents had chosen not to speak of the matter to him, though it did nothing to shield him from the gossip of others. And so Aymeric had sought an audience with the archbishop to ascertain the truth—but as a child of a lesser house, such a wish was not to be fulfilled. In the end, he came to embrace his lot, and dedicated himself in service to his people. For his efforts, he was rewarded with command of the Temple Knights.

And now he held the highest office in the nation.

"Lord Artoirel?" Aymeric repeated, with a hint of concern.

"Forgive me, I was lost in reminiscence. The archbishop's coronation, when first we spoke..."

"I see," said Aymeric as he turned his gaze upon the throne, eyebrows furrowed not unlike that day. After a time, he continued. "It feels like another life, does it not?"

Artoirel sighed. Once, I would have told you nothing.

"I am torn to remember that day. To remember the child I was, who accepted all he was taught without question. The lies. The pride I had in my lineage─my very existence! Gods, what a fool I was."

"Our scars will not soon fade. Though we try to move forward, the pain lingers. A constant reminder of our fathers' betrayals and our traumas."

Aymeric had told him the tale during the campaign at Ghimlyt. How his friend had urged the archbishop to renounce the lies upon which Ishgard was built and was rebuffed as a naive child for wanting to tear down institutions that had endured for over a thousand years. And indeed, built upon a rotten foundation of deception though everything was, Aymeric had recognized the truth in his father's words, and they remained a thorn in his breast.

We cannot easily forget that which had defined us for so long. Thus do we struggle to rebuild our lives.

Just as Artoirel was making to speak, Aymeric picked up the thread as though he had been privy to his thoughts.

"So let us forget neither the past nor the pain. Let us acknowledge whence we came, and whence we now stand set forth anew."

As the setting sun shone through the window, Artoirel nodded. In silence, they contemplated the empty throne, and the deepening shadow it cast.