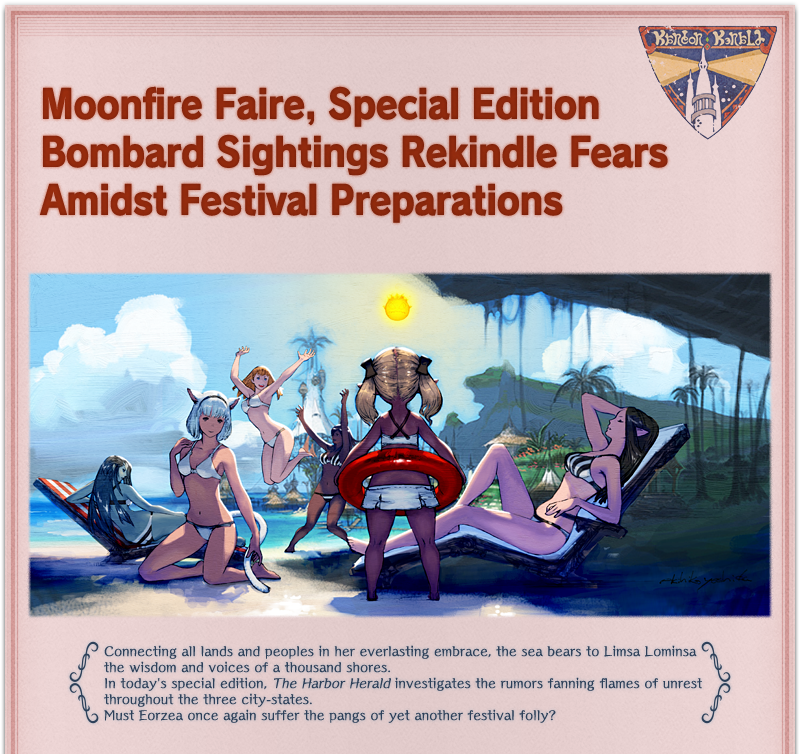 Signs of an Old Flame

Before the fall of Dalamud, which would bring about the end of the Sixth Astral Era, a Bombard invasion set ablaze panic in the hearts and minds of the people, threatening to reduce our cities to smoldering rubble and ash. Thanks to a band of adventurers who unwittingly joined the Cascadiers, the igneous invaders were vanquished, and the realm was spared a fiery fate, or so reports had us believe.
There has been talk of sightings around Costa del Sol in eastern La Noscea. However, one must always be wary of the whispers of sailors. Ever wont to make sea hares into giant sea serpents and moat carp into mermaids, their wild fabrications have led many an adventurer to misfortune and abashment. Although these were but simple rumors, I would be remiss to overlook reports now coming in from all corners of the realm. Talk of Bombards has spread like wildfire, and for the first time in five years, the Adventurers' Guild has announced the return of the Moonfire Faire.

Five long years have passed since the fall of Dalamud, and a new generation of adventurers has taken up arms in the absence of the Warriors of Light. But would they be so foolish as to run headlong into the proverbial oven that is the Moonfire Faire? There's no mistaking the Cascadier officers thronging the streets with their pamphlets, permeating the air with platitudes and empty promises. It may not be long before even you, dear reader, come face to face with these ardent recruiters.
Though times may change, the insatiable desire for exotic garments and gear shall ever persist among adventurers. A sense of yearning can be seen burning bright in their eyes at the mere mention of garbs they would receive in preparation for battle. The Adventurers' Guild is sure to entice adventurers to heed the call of the Cascadiers, but will it be enough? I can only hope the whimsical farce known as Moonfire Faire will both drive off this incendiary incursion and bolster our spirits.