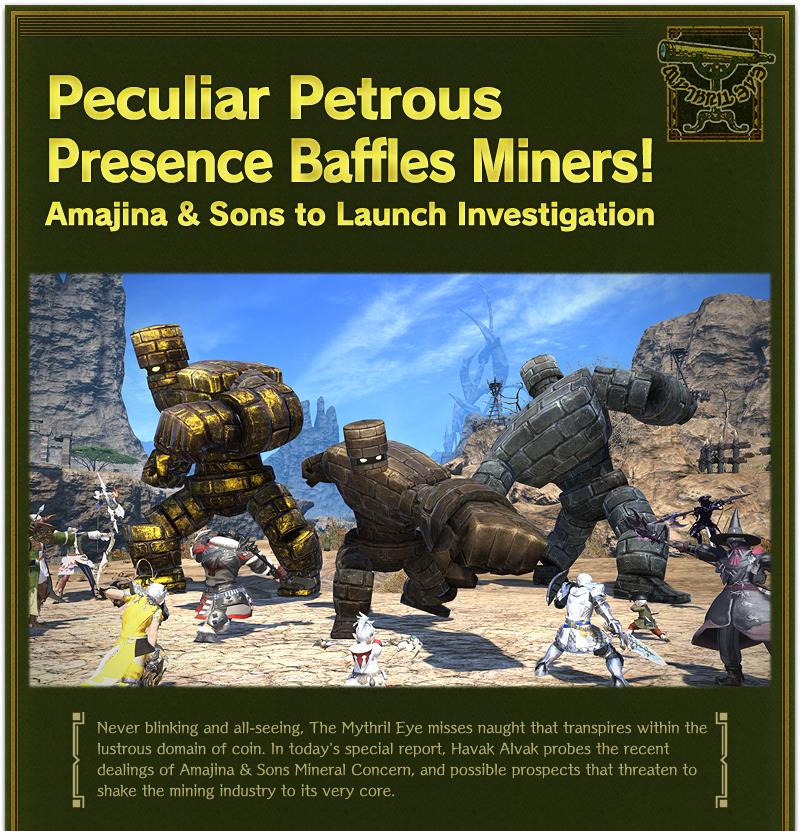 Worth Their Weight in Rose Gold?

Typically forged of stone and clay, the magical monstrosities known as golems once served myriad masters at the height of the Fifth Astral Era. Though the craft of their creation is thought to be forgotten, it is not uncommon to glimpse these terrifying titans near ruins of the ancient city of Belah'dia.

However, prodigious prospects of newfound golems both puissant and pernicious have Amajina & Sons in a pickle, and diligent miners dumbfounded with disbelief. In fact, I daresay this may be the second coming of the Mad Mythril Rush─for if the stories are true, these terrestrial titans are composed of choice minerals heretofore unseen in Eorzea.

Burgeoning businesses are abuzz with anticipation, and justifiably so. Though their quality and constitution have yet to be confirmed, the possible applications for this remarkable new resource are limitless. Lovely links to make beautiful bangles? Or perhaps perduring plating for a peerless piece of armor? The mining community is ever eager to discover the truth of these gargantuan gold mines.

While Amajina & Sons is the forerunning faction in such matters, competing interests have also popped up in pursuit of these coveted creatures. Even adventurers have been seen scouring the caverns and chasms of Eorzea in hopes of reaping the riches. Though these prospects show promising potential, we must first prove the golems to be real, lest businesses flounder in the face of fanciful fabrications.