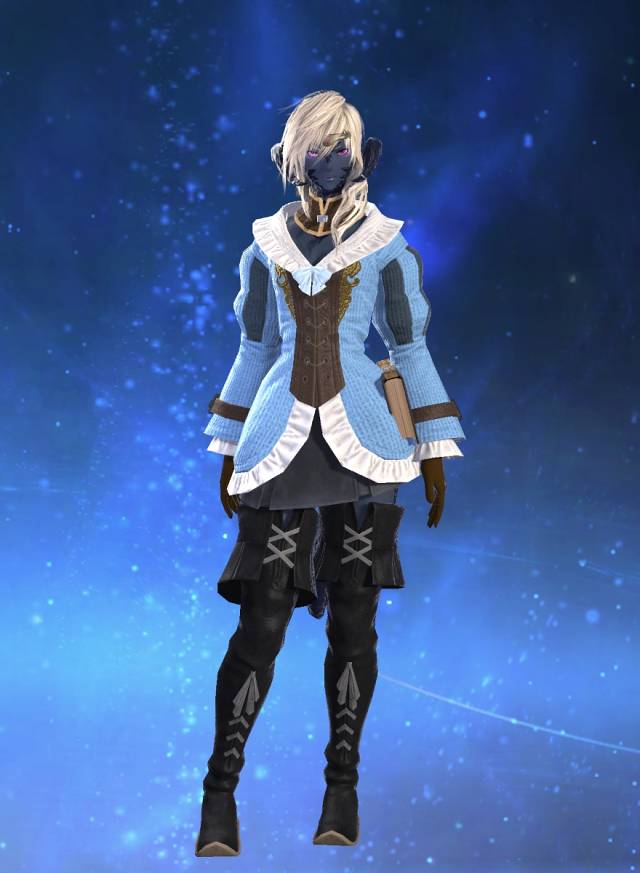 Item Level 30
Defense
Magic Defense
1
1
Disciples of War or Magic
Lv. 1
Increases EXP earned by 30% when level 30 and below.

Among her Clan, the Rayne, Daunthir was referred to as being "Born of Azim and blessed by Nhaama". Though the subtleties of the Xaelan dialect cast some doubt on what "blessed" means in this context. She grew up among her people as a curiosity. Small for a boy, and big for a girl. The elders and midwives declared her gender male at birth and on her nameday she was given a boy's name "Daunthir". Still, as adolescence approached, she didn't grow as rapidly as other Xaelan boys her age and yet, had outgrown most of the girls. it led to an awkward few years as her body never quite adjusted. To assist in evening out her growth, her family employed the services of an Apothacary that, while expensive, provided the alchemical compounds which guided Daunthir's development towards becoming a woman.

Then, the Calamaty struck. The Age was brought to a violent end. And the memories of all people were.. suppressed. Daunthir had a small amount of her medical compound left, but not enough. Still recovering from the fog of stolen rememberances, she chose to travel into the larger realm of Eorzea and Limsa Lominsa to study Arcanum and learn Alchemy. The first to make use of her Wit and Intellect in service of her fellow people, and the second to allow her the skills necessary to make the drugs required for her own specialized medical needs.

Until that point she spends a great number of Gil, more than she could possibly earn as an adventurer to maintain her supply of the compound she uses daily. To earn this amount of money, she sells her services as a scribe and tutor of letters to the wealthy and prosperous within Limsa Lominsa. A small amount of good fortune has crossed her path with her very public heroics in defense of the Morbay Drydocks, the flagship Victory, and the battle of Swiftperch. Being declared a Hero by Admiral Bloefhswyn makes her services quite lucrative for those seeking to gather greater social standing in Court. Furthermore, the stipend afforded the Admiral's Personal Envoy makes up for the revenue lost travelling among the City States of the Alliance.

Paradise (Kujata) has been formed.

Good Question (Adamantoise) has been formed.