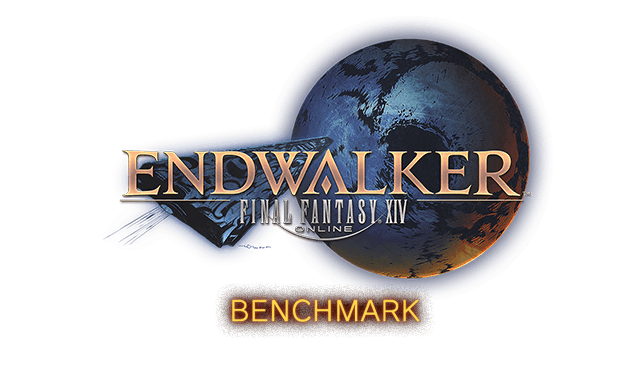 See just how well FINAL FANTASY XIV will run on your computer. This official benchmark software uses actual maps and playable characters to assign a score to your PC and rate its performance. A character creation tool is also included, allowing you to view a playable character as they will appear in-game.

Warning:
- This software is not a trial version. Please be aware that you cannot play FINAL FANTASY XIV using this software.
- You must read and agree to the terms and conditions before downloading the software.

Downloading and Running the Software

Executing the ffxiv-endwalker-bench.exe file will bring up a splash page, followed by the Software License Agreement window. 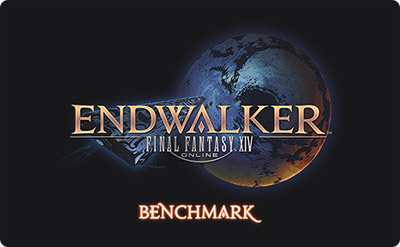 * If your PC does not fulfill the system requirements to run the benchmark, the program will close. A notification will prompt you to adjust screen resolution or other settings if necessary. Please review the aforementioned Official Benchmark Overview to determine whether your PC fulfills the system requirements. 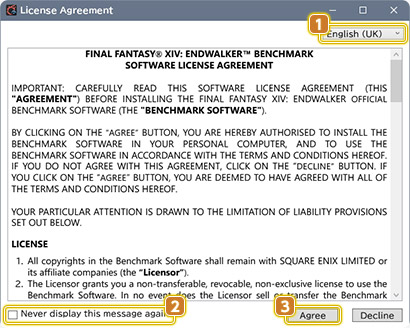 Once you accept the terms of the Software License Agreement, a launcher window for the benchmark will appear. Here you can adjust various settings for the cutscenes used to measure system performance. 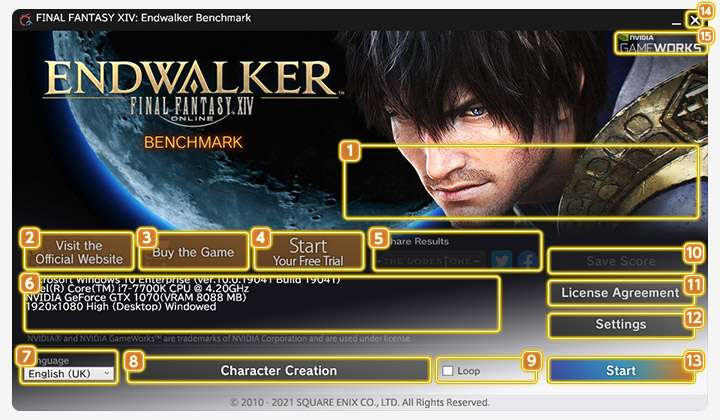 During the cutscenes, you can view your score, the specifications of your system, and a frame rate performance graph. 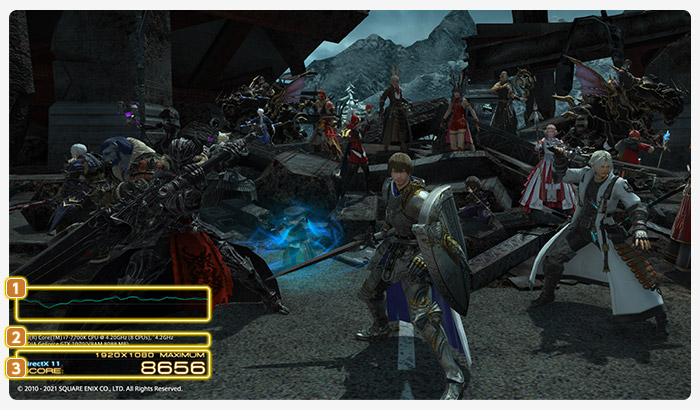 When the cutscenes end, the launcher will reappear and display your benchmark results. 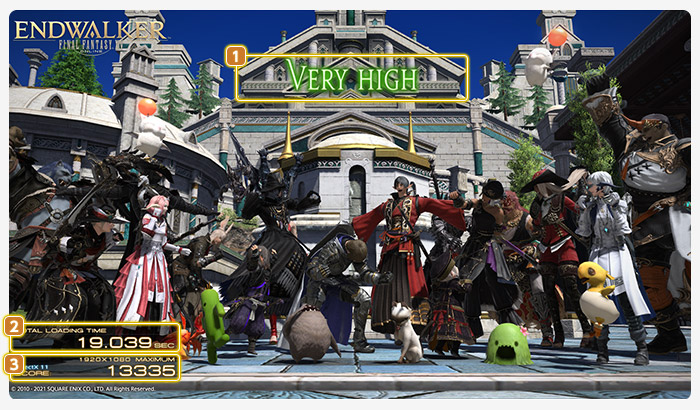 This benchmark will not only gauge your computer's performance running FINAL FANTASY XIV, but also allow you to use the game's character creation tool. Appearance data can be saved for use when creating characters in the retail version. You may choose to have your character appear in place of the default Hyur male paladin in the benchmark cutscenes.

* This benchmark and included character creation tool can be used without a Square Enix account or a connection to the game's servers.

* Data from the character creation tool will be saved to the following folder: My Games/FINAL FANTASY XIV - A Realm Reborn (Benchmark).

* To use a Viera or Hrothgar character in the full release, you must own a license for FINAL FANTASY XIV: Shadowbringers.
Character appearance data saved using this benchmark software can only be used on the PC on which the Windows version has been installed.

When launching the character creation tool, you may choose to create a new character or load existing character data. This data can also be loaded from the benchmarks for FINAL FANTASY XIV: A Realm Reborn and its expansions, as well as the beta and retail versions of the game.

Begin creating your character by selecting a race, gender, and clan. You will then be given the option to customize appearance. You may return to an earlier step of the creation process at any time. When your character is ready, a save prompt will appear. Select Yes if you wish to save appearance data, then specify a location. Data for up to 40 characters may be saved, and can be selected to be used during cutscene playback at the main character selection screen.

The Benchmark Score and Data

Starting the benchmark will cause several cutscenes to play. Once the cutscenes have completed, a score will be displayed. The score represents how well FINAL FANTASY XIV is estimated to run on your PC. Please use the explanations of the scores outlined below for reference.

* Please note that the score does not guarantee that your system will run FINAL FANTASY XIV. Please use it for reference only.

* For the FINAL FANTASY XIV: Endwalker benchmark, scoring criteria has been updated to account for the increase in multiplayer content and provide a more accurate evaluation of how your computer will perform when running the latest version of the game.

The FINAL FANTASY XIV: Endwalker benchmark can only be run on a 64-bit Windows operating system.