The winter of the Garlean Empire's thirty-third year was a bitterly cold one, and the capital lay muffled under a thick blanket of snow. Black uniform stark against the pristine white, a boy strode as briskly as he could through knee-high drifts, his boots spraying powdery flakes before him with every hurried step.

"And I'm the first to arrive!"

The boy huffed in satisfaction as he stood before the main entrance to the Magitek Academy's central library, having sprang up the stately stone steps two at a time. Brushing his silvery hair out of his eyes, however, his moment of triumph was cut short by the sight of a skinny youth, blonde and smirking, sidling into view from behind a colossal marble pillar.

"Sorry to disappoint you, Garlond─but you'll have to get up earlier than that to beat me."

Such was the first meeting between Cid Garlond and Nero Scaeva─at least, as far as the young Cid was aware.

The pair were similarly exceptional.

As the son of Midas nan Garlond─the Empire's foremost authority on magitek─and a renowned child prodigy in his own right, Cid had been invited to apply to the Magitek Academy some few moons before. Nero, too, had earned fame as the genius of his province, and would have been comfortably the youngest student in the institution, were it not for the presence of the equally precocious Cid. Though both boys were barely into their twelfth summers, their extraordinary achievements had qualified them to sit the entrance examinations four years earlier than was normally permitted.

Accustomed to always being top of the class back home, Nero was not amused to find that the only other boy his age was held in higher esteem. His theretofore unsurpassed brilliance had secured him a patron and passage to the capital, and when he finally laid eyes upon his silver-haired rival during the Academy's entrance ceremony, he had vowed to outdo him in every conceivable manner.

"Do I know you?" Cid snapped in irritation. Gifted though he was, he was no less a twelve-year-old boy. And this brash youth who had addressed him with such scorn had immediately raised his hackles.

"You should. But I don’t suppose you've any time for peasants from the provinces," Nero shot back. "The name's Scaeva. Nero Scaeva. I'm the one who's going to upstage you at the exhibition by taking home first prize."

The Imperial Youth Magitek Exhibition was a showcase for aspiring engineers from across the Empire to submit their magitek creations for expert appraisal. Cid had entered an invention a year before joining the Academy, going on to become the youngest ever participant to win the event's highest honor. And it was to research his submission for this year's contest that he had endeavored to arrive at the library just as it was due to open its doors for the day.

Cid knew that many of the older students regarded him as the person to beat, but none had gone so far as to declare their rivalry directly to his face. As such, Nero's cocksure challenge flustered him more than he cared to admit.

From that day onwards, Nero made a habit of antagonizing Cid at every opportunity.

If Cid should borrow a research volume, he would declare its content "elementary." If Cid was using the workshop's lathe to make a part, its quality would be "substandard." Even the selections Cid made at the lunch hall did not escape judgment, invariably befitting "the palate of an infant."

"Damn you, Nero," Cid fumed to himself as he worked to assemble the delicate pieces of his submission. "Will you never leave me be?"

And so the months passed.

Spring came at length, though the weather refused to acknowledge it, the snow showing no signs of melting as the capital shivered in winter's lingering chill. Yet despite the cold outside, the exhibition hall was stifling─the air heated by the frenzied activity of the many students within. Wearing variously panicked expressions, they bustled around their respective pieces, desperate to ensure a smooth performance for the contest’s final and most heavily weighted category: the practical demonstration.

Cid himself was busy testing each component of the flying machine he had constructed, focusing intently upon the flapping motion of his invention's aether-infused wings.

"You don’t honestly think a flimsy toy like that will impress the judges...?"

A voice dripping with disdain prodded at Cid's consciousness, shattering his concentration. Agh, not now, Scaeva...

Nero had arrived cradling a sleek tube in his arms, which he now proudly presented for Cid’s inspection. Though his soul cried out to tell him where to shove it, Cid’s better self reasoned that he would gain nothing from rising to this obvious provocation, and he continued working on his own device in determined silence.

An instant later, a deafening roar reverberated around the auditorium.

An explosion, offered his inner voice. Suppressing a smile, Cid stood up to see whose invention had met with misfortune. But rather than twisted pieces of magitek, his questing gaze picked out a group of soldiers emerging from a haze of drifting white smoke. They belonged to no legion. The mismatched equipment, the unshaven faces, the unkempt hair─it all pointed to one thing. Rebels.

The initial moment of shock was broken by a single, piercing scream, and then the hall dissolved into chaos. Students clambered over each other in their haste to flee, abandoning their precious works without so much as a backwards glance.

"Th-This is an outrage!" stammered Nero, the sight of armed dissidents sending cracks through his usual veneer of self-assurance. "How did this rabble slip into the capital!?"

Cid appeared stunned by the scene unfolding before him, but though his body was slow to respond, his mind was already assembling the puzzle of the who, the what, and the why.

As he watched, the apparent leader of the insurgent group quickly scanned the faces in the exhibition hall then turned to bark orders at his fellows. "The target's not here. You lot keep the imperials at bay─the rest of you, upstairs with me!" A handful of rebels then began erecting barricades and ejecting clumps of cowering students, while their comrades headed towards a nearby staircase.

"They're looking for someone..."

The moment Cid whispered the words out loud, he knew. Of all the dignitaries currently in attendance, the most notable was, without a doubt, the judging panel's chairman─the Empire's preeminent engineer, Midas nan Garlond.

Father! Though Cid had yet to ascertain the motive, it was enough to know his sire's life was in danger.

He clutched his flying machine close to his chest and ran. Avoiding the throng of panicked students scrambling towards the building's exits, he made for a staircase and raced up to the second floor. If he remembered correctly, a conference room had been set aside for the judges to take their ease during the exhibition’s lengthy preparation periods.

Slowing from his mad dash, Cid crept along the last few yalms of a side corridor. From around the corner, he heard a man snarl.

"Call off the test or you die! I won’t ask again!"

All the pieces fell into place. His father had scarce been at home this past moon, his time spent traveling back and forth between the capital and Bozja Citadel in the frontier lands, where some important─and confidential─experiment was taking place at the behest of the Emperor himself. And the garb of these rebels seemed to match the descriptions he had read of that province's people.

Their plan was obvious now: by taking his sire prisoner, they hoped to put a stop to whatever it was he was working on, imagining his experiment a threat to their home. The military would be reluctant to endanger the "Father of Magitek," and thus they need not fear any heavily armed reprisals─in the short term, at least...

"After Daddy, are they?"

Cid jolted in surprise, almost dropping his flying machine. Spinning his head, he saw a blonde boy crouched behind him, also hugging his invention.

"Keep your bloody voice down, Nero!" Cid hissed. "Why in the seven hells did you follow me!?"

"I couldn't let you run off and get killed," Nero explained with forced nonchalance. "You wouldn't be there to see me win the contest."

"The contest!?" Cid spat, barely stifling a shout. "Is that all you can think about!?"

"Only until I've won it," came the reply. "And while I am certain my cannon will take first prize, it will be a hollow victory without your submission sitting there below it on the podium."

Incensed, Cid closed his eyes and took a deep breath─but in that moment, an idea came to him. His eyes snapped open, and flicked between the magitek devices they both still held in vicelike grips.

"If you're so keen to have our entries judged," he whispered, fixing Nero with a stare, "help me save the judges."

Thus began an unprecedented collaboration between the two young prodigies. Concealing themselves within a sanitation closet, they proceeded to strip down the hypercurrent cannon and attach it to the flying machine, all without a word of disagreement passing their lips. The result was a rudimentary combat drone. 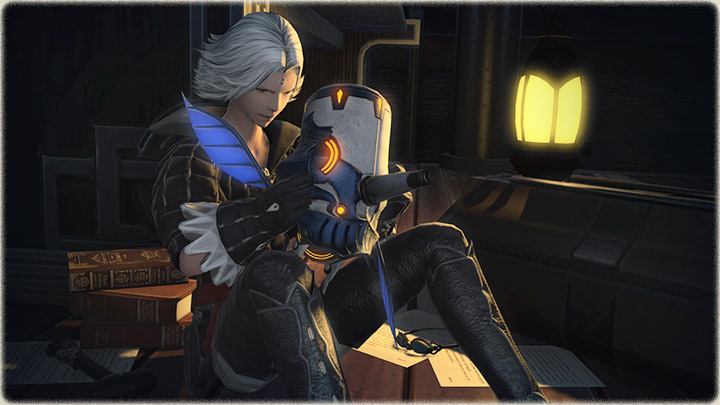 Ignoring his companion's enthusiasm, Cid fiddled with his half of the control module they had pieced together from the leftover parts. The compact ceruleum engine snorted comically as it whirred to life, but despite the additional weight, the newly built turret lifted smoothly off the floor, its aetherwings beating slow and steady.

"Right," Cid looked up, satisfied that the device was operational. "I'll do the flying; you do the firing."

"As you command, Master Garlond."

Nero threw wide the closet door, and Cid sent the drone hurtling down the hallway at maximum speed. Once around the corner, a crackling burst from the cannon struck the rebel standing guard. His limbs twitched spasmodically as he fell senseless to the floor. Without slowing, the buzzing machine barreled on into the conference room, its breathless operators a few steps behind.

The Bozjans scrambled to bring their weapons to bear, their leader stepping forward to answer the sudden intrusion. "Stop right there!" he demanded. "We have a hosta─" And there his words devolved into an agonized scream as a bolt of energy struck him squarely in the chest.

Nero jabbed at the firing button with fiendish glee, and arcs of crackling lightning filled the room.

A short while later, the imperial guard arrived at the auditorium. The Emperor's finest duly cut through the defenders downstairs and stormed the upper floor, only to be greeted by the sight of a heap of unconscious insurgents...and a glassy-eyed Midas nan Garlond─all victims of Nero's indiscriminate display.

Once every trace of the incident had been swept away, and the affected parties afforded sufficient time to recover, the interrupted exhibition held its awards ceremony. The identity of the winner came as no surprise to anyone. Or rather the winners. First prize was awarded to Cid Garlond and Nero Scaeva, in honor of their jointly created magitek turret.

"Something troubling you, Chief?"

Cid's head snapped up at Jessie's query, leaving his hand with no beard to stroke.

Jessie raised an eyebrow. "Anything to do with that data you requested?"

It was true that, ever since he had asked for a certain research file to be smuggled out of the Empire, Cid had perhaps indulged in more brooding than was healthy. He had work to do, he knew, and the stakes could hardly be higher.

"Worried about me?" he teased, forcing a smile. "I'm fine, Jessie. I've made peace with the past. Besides..." he continued, the grin genuine now, "the memories aren't all bad."

The time for deliberation was over. Nodding to his colleagues, Cid Garlond, master engineer, strode off to join his companions in their fated and final confrontation. 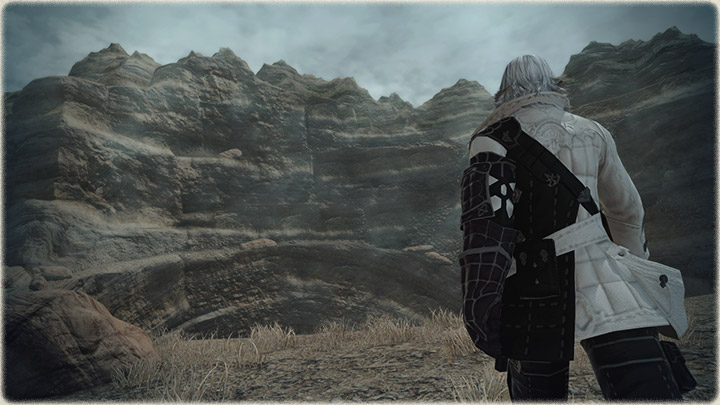