The breeze that caressed the ruined palace seemed tinged with gold.

More than anything else, it was said that the great wyrm Ratatoskr loved to weave songs, and the eldritch power of her verses still lingered here, a thousand years after her voice was forever silenced by the treachery of mortals. In the wake of her death, the dragons had named her home in the clouds Sohr Khai, words which mean “grieving apology,” out of guilt over their failure to protect her, and left the place untouched. 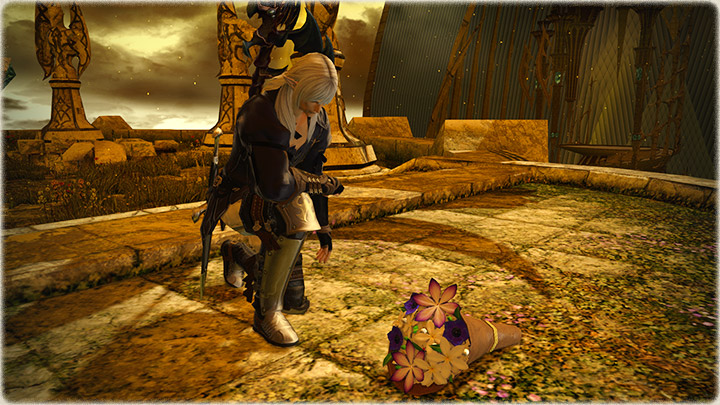 A lone figure took in the scene before kneeling to lay a bouquet.

“I know I make for a strange messenger...but the war is over.”

It was, he conceded, an awkward utterance. But how could it be otherwise? What else could he say to the she-wyrm whose murder had kindled the flames of the Dragonsong War─he whose sole purpose in life had been to hunt her kind? Sorry...? Even as he struggled to fashion an apology, a sudden gust scattered his offering of flowers, sending petals billowing in all directions.

“I did not expect to find thee here, Azure Dragoon.”

Estinien did not so much hear the voice as feel it echoing inside his mind. But he both heard and felt the beating of mighty wings that followed. Looking up, he beheld a familiar white form descending. Hraesvelgr... So much for privacy.

Following Nidhogg’s defeat and his miraculous rescue upon the Steps of Faith, Estinien had remained in the Holy See only long enough to witness his old friend Aymeric appointed lord speaker of the House of Lords. He had then quietly taken his leave, not with a mind to forsake his homeland, but to ponder how he might serve it in this new age. With the war at an end, he reasoned, his presence was no longer required. There was no place for a man who had spilled as much dragon blood as he, much less one who had turned lance and fang upon his own people as his enemy’s thrall.

Whereto, then, for Ishgard’s unwanted champion? Estinien could think of several places. And so he had embarked upon a journey.

To the ruins of Ferndale, the village of his birth, to offer a prayer to his beloved mother, father, and little brother, Hamignant. To a cliff overlooking the capital, to give thanks to the knight brave and true whose sacrifice had kept Ishgard’s hopes alive. To the floating continent, Azys Lla, to pay tribute to the maiden of conviction who blazed a path for her comrades by burning the candle of her life.

His old self would never have contemplated such a sentimental journey. But times had changed, and so had he. Last of all, he had come to Sohr Khai, to voice his regret to the long-departed Ratatoskr. A visit he had hoped would go unnoticed.

The great wyrm’s muzzle contorted into what must have been a smile.

“Ah, do I intrude? I but desired to show mine appreciation for thy gesture. My brood-sister would have welcomed it.”

For a time, Estinien’s soul had been merged with that of Nidhogg; the dread wyrm’s tumultuous storm of emotions comingling with his own. The rancor, the fury, the grief─he had felt it all. And the grief lingered even now. The gulf left behind by Ratatoskr’s passing was one he knew as well as any man or dragon. And thus were Hraesvelgr’s words more comforting than the wyrm realized.

“I am owed no such kindness. But…thank you,” Estinien replied, his voice catching in his throat. Gathering himself, he continued, “And for what it is worth, I am Azure Dragoon no longer. This age has no need of my lance.”

At this, the great wyrm’s eyes narrowed.

“And yet there it is upon thy back, fair dripping with my brood-brother’s essence.”

The observation caught him wholly unawares. When he had left Ishgard behind, he had done so without his dragoon’s armor, deeming it a relic of a former life. Yet somehow it had not occurred to him to likewise lay down his lance, warped though it was by Nidhogg’s power. Estinien’s confoundment was plain to Hraesvelgr, and when he spoke, it was in tones tinged with the faintest trace of pity.

“Thy fight is not over, mortal. As thou knowest only too well.”

The sting of another realization.

Damn you, wyrm. He had the right of it, of course. Azure Dragoon or no, there was still work to be done. Purpose even for a lance tempered and honed in an unjust war.

“If thou wouldst swear to fight for man and dragon both, then come with me. Unto thee I shall bequeath armor befitting a true dragoon.”

Without waiting for a response, Hraesvelgr leapt into the sky with a powerful kick, his tattered wings bearing him away so swiftly that his looming form soon became no more than a speck in the heavens. Snapping out of his reverie, Estinien dashed to his manacutter and took off in pursuit.

After a brief flight, they came to a cluster of ruins upon the fringes of Sohr Khai; a stable for wyverns during the forgotten days of harmony, Estinien guessed. There the great wyrm landed, and after he had followed suit, Hraesvelgr nodded towards the heart of the ruins. They had not walked far when Estinien caught sight of what he knew at once to be their destination.

Inside what appeared to be the remains of a barracks built for men sat several armory chests. All bore the scars of the inexorable march of time save one─a pristine example, preserved by some manner of draconic enchantment. Estinien needed no further encouragement.

As he approached the chest, Hraesvelgr broke the silence. “In the beginning, dragoons were men who fought beside dragons, not against them. Ratatoskr took great pleasure in bearing such fearless souls upon her back. And thus did she bless their armor with her power.”

Lifting the lid, Estinien’s jaw fell open. Before him lay not one but two magnificent suits of plate armor. Their hue was all too familiar. Azure. Gods forgive me...

“At first, men felt honored to receive such gifts. But the more power they received, the more they craved. And all too soon, naught save the source of that power would sate them.”

And so they butchered her... Devoured her eyes like feral beasts.

The armor of the first dragoons, brimming with power freely given... The mere sight of it made Estinien’s heart swell. But he made no move to claim his prize.

“Why?” he said at length. “Why grant me this power? What makes you think I am any different from Thordan and the rest?”

At this, the wyrm paused, head lowered, before answering softly, “A maiden did give me cause to believe in thy kind once more.” Only after another lengthy silence did he continue. “Never was this armor worn. It wanteth for a master─a true dragoon. Thou hast cast aside one azure. If thou wouldst take up another, it is thine.”

A short while later, Estinien emerged from the barracks with new armor and newfound purpose. The azure plate gleamed brilliantly as it caught the light of the midday sun.

“Such armor deserves a name,” he declared. “And I know one which befits it well.”

Hraesvelgr stared at him expectantly.

“Iceheart. For it shall watch over a man ignorant of all things save how to wield a lance steeped in anger."

At these words, Hraesvelgr threw back his head and let loose a mighty roar, both of approval and amusement. The dragoon had chosen well. 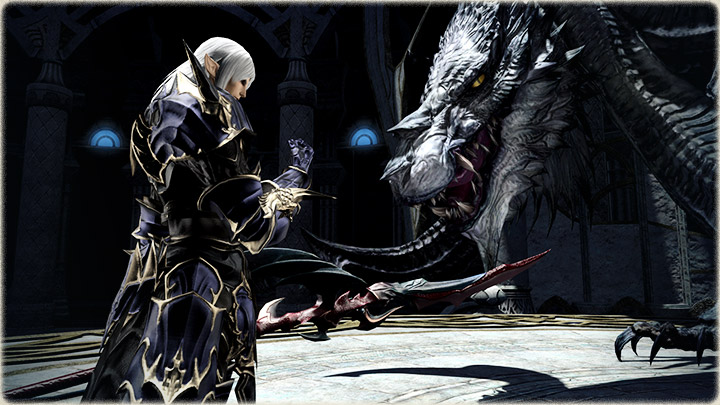 When Estinien finally left the Churning Mists, his feet carried him almost of their own volition towards the battlefield once more, there to cut a path for his comrades, whose struggles yet continued.

Time went by, and the war for Ala Mhigo’s liberation found the forces of the Eorzean Alliance at the fortress city’s doorstep. From his cliffside vantage point, Estinien watched as the host wended its way through the Lochs, a great serpent with soldiers for scales. Though they were too far away to see, he doubted not but that his comrades were among them─Aymeric, Alphinaud, the Warrior of Light. He had silenced the monstrous cannon at Castrum Abania to pave their way; the final act of casting down the Garleans, he left to them.

Something else demanded his attention. A matter for him alone. Make that two matters, he inwardly corrected. Spent of aether as they were, it had been no easy task to track them down...

As the final battle was joined and his friends fought on, he quietly intercepted a squadron of flying armor that was moving to flank them. It was then that he felt the call─a power he knew as intimately as he knew himself, emanating from the skies high above the royal palace. Pulling the tip of his lance free of a smoldering wreck, he struck out at a brisk run, making his way through the unfolding chaos. But by the time he finally emerged in the gardens of the Royal Menagerie, it was all over. All save his own task.

Even without seeing them, he knew exactly where they lay. Striding through the exotic flowers, heedless of their beauty, he came to a halt at a patch like any other. And there they were, Nidhogg’s eyes, staring blindly up at him.

“Well, well, well, what a fine mess we've made,” he greeted them as old friends. “All but spent feeding that primal, eh? Well, you won't be making any mischief with that amount of aether.”

He drew his lance─named for his nemesis and the dragon he himself once was─and aimed its deadly point at one helpless eyeball.

Bracing himself body and soul, he plunged into the eye. It gave way readily, turning into black mist and disappearing into the crimson sky. Wasting no time, he then consigned its twin to the selfsame fate.

“There. There ends your hateful legacy.”

Thus did Estinien’s journey come to an end─a journey which had seen him revisit the past and in so doing find a future. His lifelong battle having reached its true conclusion, he could finally begin anew. None can say whither his road will lead, whether the skies that greet him will be the striking blue of day, the blazing crimson of dusk, or the deepening black of twilight. Yet wheresoever he should find himself, one thing is certain: he will ever wield his lance for man and dragon both.