Carried aloft by icy winds, the piping voice of a distant soldier drifted across the Lochs.

"Oh, this crate'll make a coffer when the wager pays off,

Or this crate'll make a coffin when the wager falls through...♪"

Pipin knew the song well, as did every Ul'dahn over a certain age. It told the tale of a youth on the way to seek his fortune in the golden city, with only a box for company. His perilous journey through the wilds was depicted as a spirited roll of the dice, an invitation to Nald’thal to fill his burdensome crate with gold, or failing that his mortal remains.

The marshal had always doubted that the hero of the tale had won his wager, largely because the song had been a favorite of his father’s, and he could not think of the man without bracing himself for some impending disaster.

In stark contrast to his adoptive parent, Pipin's birth father was an abject failure─an inveterate gambler and a drunk who would sooner sell his own son than repay a debt with his own sweat. A man who had, in fact, done just that. Pipin had been twelve years old at the time, busily sorting rocks at the mine when he was accosted by a brawny lanista.

"Come, boy─you belong to me now! And the bloodsands ever thirst!"

And before he knew what was happening, the young Lalafell found himself sprawled on the floor of a cramped stone cell in the gladiator stables. Days of ceaseless drudgery were to follow. Every morning, he was awoken at the crack of dawn to perform chores for the older fighters. And when those duties were done, he could look forward to hours in the practice yard under the gaze of the merciless drillmaster, the slightest mistake corrected by the snap of a whip or the thud of a cudgel.

The only thing Pipin didn’t hate about his new life was the food. A gladiator's body was an investment, and the lanista wanted his charges fit and strong to bring home his share of the prize money. Even the novices were provided with hearty meals: great slabs of bread, and fist-sized chunks of meat swimming in broth. Better still, the cook was liberal in his use of spices, treating Pipin’s palate to a world of flavors he never knew existed.

But beyond that single pleasure, the pain of each passing day seemed ever more difficult to bear. Pipin wasn't sure how long he could endure the grueling routine, and even if he did, there was no guarantee that he would survive his first match on the sands.

I am no better than a slave.

Desperate to escape, Pipin watched and waited for a chance to run away, but the drillmaster never once seemed to relax his guard. It seemed there was no way out but the grave. Then, after a year of back-breaking labor and bone-crunching training, he was ordered to serve as an attendant to one of the stable’s champions. It was a meeting which would change Pipin's life forever, though it hardly seemed momentous at the time...

The gladiator seemed satisfied with Pipin's answer, and made no further effort to engage him in conversation during their walk to one of the Coliseum’s antechambers. Unsure if the rugged Highlander was nervous before his match or merely a man of few words, the boy resolved to hold his tongue. Gladiators could be a foul-tempered lot, and Pipin did not wish to earn himself a clip around the ear for breaking this one’s focus.

Even after arriving in the antechamber the Highlander said nothing save for a few terse instructions. Pipin carried them out wordlessly, helping to strap the gladiator into his armor, before finally proffering his helm; a piece styled to resemble a bull's horned head. The towering Hyur plucked it from his hands as if it weighed nothing, pulled it on, and strode out into the arena. 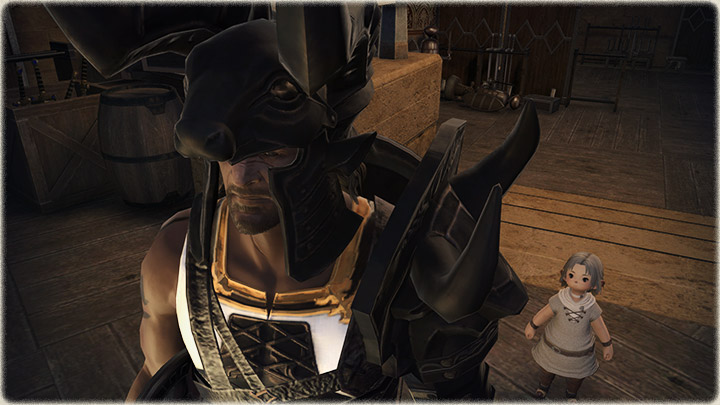 "My lords, ladies and gentlemen─I give you Raubahn Aldynn, the Bull of Ala Mhigo!"

The ringing voice of the Coliseum herald was answered by a thunderous roar that shook the walls of the antechamber. Pipin was dumbfounded. This "Bull of Ala Mhigo" had merely to set foot on the sands to send the spectators into a frenzy.

In the months that followed, Pipin often found himself acting as Raubahn’s attendant. Though the gladiator was reticent at first, their stilted exchanges gradually grew longer, and the pair came to share the details of their past. The Highlander spoke of his birth in the land of Ala Mhigo, and of the battles he had fought─of his people’s rebellion against a tyrannous king, and of the Garlean Empire’s subsequent invasion. He told of how he had fled his homeland, desperate and wounded. Of how he had stumbled through the wilds until he reached the city of Ul'dah, where he was imprisoned on suspicion of espionage. And now here he was: a Coliseum champion, fighting for his freedom before a crowd who chanted his name.

It seemed inexplicable to Pipin that a man of Raubahn’s strength and charisma had been forced into the brutal life of a gladiator. But the thought did not bring him despair. On the contrary, he was encouraged by the idea that a slave of the bloodsands might win enough purses to purchase his own emancipation─that he could be the master of his own fate.

If my fellow slave can buy his freedom, then why not me?

His purpose clear at last, Pipin attended to his training with new determination. He would survive. He would be free.

"Here it is! I have the final payment in my hand!"

The look of triumph on Raubahn’s face as he strode back into the antechamber would linger long in Pipin’s memory. The Highlander seemed happier than after all of his previous victories combined. And little wonder…

He need never set foot on the bloodsands again. The mere thought of it made him giddy. But in that same moment came the realization─the certainty that the man who had so transformed his outlook, the mentor in whose footsteps he longed to tread, would soon be gone.

"Why are you frowning, lad?" Raubahn asked, confused. "You’re free."

Now it was Pipin's turn to look confused. They stood frozen for a moment in an awkward tableau: a hulking gladiator clutching a bulging prize purse staring down in consternation at an equally puzzled Lalafell youth.

"I'm saying you needn’t risk your life anymore," Raubahn went on, a hint of exasperation in his voice. "Most young gladiators never get to be old. Pit two against each other, and both are apt to end up dead. I would spare you that fate."

Realization finally dawned. Over the months since their first meeting, the Highlander had not been setting his winnings against the price of his own freedom. He has been paying off Father's debt. Pipin's eyes filled with tears as fear and exhaustion─his constant companions for a year and more─were swept away by waves of relief and gratitude. He would toil for the lanista no longer.

The following morning, Pipin stood alone at the gates to the gladiator stables, his meager possessions gathered in a small burlap sack. Raubahn could not leave his cell, and it seemed that neither the lanista nor the drillmaster cared much for a youth in whose future they had no further investment.

Pipin walked out onto the street. The desert sun had scarcely broken the horizon, and the cobblestones felt cool beneath his feet. Free. He took three deliberate steps, savoring his unexpected liberation, and then settled into a stroll. But with every footfall along the empty thoroughfare, he became more aware of the niggling doubt in his belly. What if Father wagers all on another losing cause? His wine-sodden sire had already shown a willingness to sell off his only child─there was nothing to prevent him from doing so again. Never. Pipin came to an abrupt stop, turned on his heels, and set off back the way he had come.

"Pipin, lad? I thought you'd be long gone by now."

Raubahn tilted his head as the small figure at the door to his cell took a deep breath.

"I wish to continue my training as a gladiator," Pipin declared, his voice clear and unwavering. "I am grateful for all you have done for me, but I will never truly be free until I have the strength to free myself."

Pipin duly explained how his father might very well sell him as chattel once more, and that he would rather be the master of his own destiny, however brutal, and learn at the feet of a man he truly respected, than live in fear. Raubahn gave his answer with a fierce grin.

Though well-acquainted with the man's generosity, Pipin was nevertheless astonished by what the gladiator did next. Pipin's father, it transpired, had signed a contract when handing over his son to the lanista, transferring all his rights and obligations as the boy's legal guardian. Drawing on his prize money, Raubahn bought this document from Pipin's former owner, and invoked the guardian clause, thus beginning formal adoption proceedings.

In the years that followed, the pair lived together, as imprisoned father and emancipated son. A curious arrangement, to be sure, but one which allowed Pipin to resume his study of the blade under Raubahn's decidedly less callous tutelage. But despite Pipin's protestations, his adoptive father would not permit him to fight on the sands. Raubahn swore, however, that his path would be his own to choose once he came of age.

Now twenty-five years old, seasoned by a stint as a mercenary, Pipin was an officer of the Immortal Flames, fighting to reclaim Raubahn's beloved homeland.

"You risked much and more to see me thrive, Father," Pipin said, unsheathing Tizona's heavy blade. "And I will see that your wager pays off!" 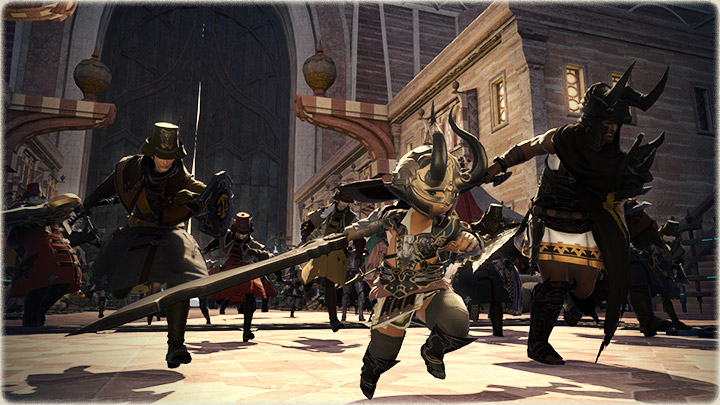